Moments of Conception 034 — The Review Scene from Singles 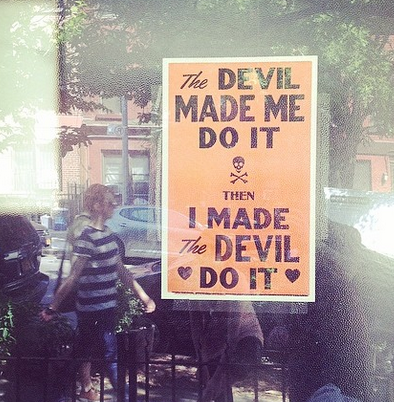 Today’s clip comes from the review scene in Singles:

Abstinence is a
worthy artistic detachment. Our fundamental drive as creators is to be
heard. To extend our sentiments and make our thoughts and feelings and
expressions accessible to the world. That’s why reading reviews of our work is
such a seductive pastime. It appeals to our deepest artistic desires. But when
we get sucked into that ego vortex, it becomes an addiction. A rabbit hole of
defensiveness and deflation. And the worst part is, that addiction becomes a
tail that grows back everyday. Or, in the case of digital media, every few
minutes. Singles is a movie about
aspiring. It’s about the burgeoning phase of a career in which artists try to
find their creative voice. And
so, it represents a crucial choice we have to make. Should we torture ourselves
listening to voices that don’t matter, or execute work that does matter? Should
we invest time and energy
reading reviews about our creations, or develop deeper trust in our
creations? Should we expose ourselves to harsh, unsolicited feedback, or drown out the white noise and get
back to work? The answer is, whatever keeps us on the side of the creators. Are you focusing on principal creation or
peripheral masturbation?

Turn feedback into
inspiration. Feedback can be procrastination
in disguise. Just another excuse not to do the work. On the other hand,
feedback can also be treated as inspiration. An energy source to fuel your
creativity. If you look closely at the newspaper, the music critic says the
band’s lead singer should move to another town where he can disappear into the
masses and not stand out like the relentlessly mediocre talent that he is. Ouch. There isn’t an artist alive,
rookie or veteran, who wouldn’t be devastated by that blow. Cliff appears
legitimately wounded, of course, even despite his band’s best efforts to keep
the painful barbs out of his ears. And yet, in that moment, he reminds
himself that he can process his feelings later. He dismisses the negative comments before they make him
upset. For now, the negative energy makes him stronger. They will not retreat. This
band is unstoppable. And no matter what happens tonight, they just remember,
they’re still loved in Italy and Belgium. Are you giving someone’s opinion more weight than it deserves?

You can’t argue with
a ringing register. Criticism creates a visceral reaction in almost
everyone. Especially artists. We are a thoughtful and romantic and empathetic breed,
easily wounded and frequently derailed by shame and humiliation. Worse yet,
criticism can lodge in our minds and eat away at our core. The solution,
according to one of my favorite
books, is transforming ourselves into people less willing and less
likely to be criticized. Maisel explains that we can actually orient our personalities
in a direction that uses criticism as an opportunity to effect positive
change. I’m reminded of the time I
was featured on a list of the worst tattoos of all time. How proud my parents were. But of course, the shady underworld of anonymous commenters lashed out at
me. They called me names that would make a rainbow blush. Meanwhile,
something occurred to me. I was the one who built an iconic brand, a profitable
enterprise and entire career out of wearing a nametag. Not them. So who’s the
joke really on here? Will you let
criticism prevent you from fulfilling your dreams?

What’s your favorite moment of conception?