Moments of Conception 032 — The Driving Scene from Happy Gilmour 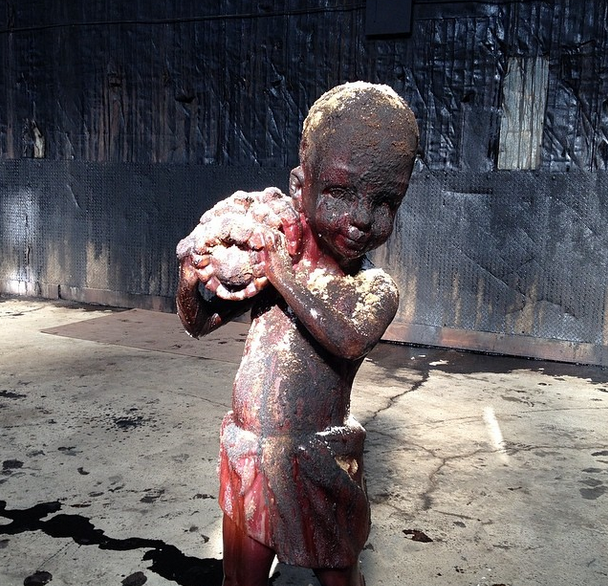 Today’s clip comes from the backyard scene in Happy Gilmore:

Develop an appetite
for playful experiences. Imagine how many significant ideas, inventions,
projects, businesses, even careers, that started out as innocuous little blips.
A bet between competitors. A joke between friends. An experiment between
colleagues. An absurd idea between you and the bedpost. These are the moments
that become fertile playgrounds in which innovation flowers. Our guards
are down and our curiosities are up. And that’s the ideal mindset for
creativity. The tricky part is making the transition from blip to brilliance.
Noticing you’ve stumbled upon something with a high level of movement value, and then taking
immediate and massive action upon that. Gilmore dramatically recognizes his
moment of conception. It’s the unorthodox
swing. And so, he spends the rest of the movie leveraging it. First, as a
driving range hustle to make a few extra bucks on the side. Second, as a strategy
to pay off his grandmother’s tax debt. Third, as a calling card for his career
as a professional athlete. And finally, as a catalyst for the generation of
golf enthusiasts. All because he made some stupid backyard bet. How do you give the people around you
permission to be playful?

I am an idea, give me
money. It’s the ultimate entrepreneurial epiphany. You’re doing something
you love, something you’re naturally good at, something you would gladly do for
free, and then out of the blue, somebody offers you money to do it. Like, real
money. They’re going to cross your palm with silver for being yourself. It’s a
pinch me moment. Because you think to
yourself, wait, you can get paid for
this? I remember the first time an organization asked me what my speaking
fee was. That was the first time I’d ever heard that term. Ironically
enough, I was speechless. Eventually, though, I gathered the courage to charge the
company a whopping hundred dollars. And as soon as I held that first check in
my hot little hands, my world changed forever. Just ask any artist or athlete
or entrepreneur. It’s the strangest sensation. Physically hold real money that
you earned from doing what you love, from being who you are? That’s a
transformative moment. But again, only if we allow it to be one. If we shrug
the money off like it’s no big deal or we didn’t deserve it or the experience
was a fluke, we may never see it again. Besides, you don’t do it for the money,
you do it for what the money stands for––that you’re worth it. Are you still playing for free?

The only way to
belong is on your own terms. Happy says golf is a stupid sissy game that
requires goofy pants and a fat ass. Even when he discovers his unconscious
competency to drive one hell of a long ball, he still maintains his position
about the sport. Golf, for him, is a means to an end. Money for grandma’s house. That’s it. But after a few months of
playing, he has another epiphany. He can succeed on his own terms. Gilmore can still participate in the
game without marching in lockstep with its historically rigid and pretentious
culture. With his unorthodox swing, overaggressive streak, wild television antics
and rockstar fan interactions, he refuses to be swallowed by
everybody else’s vision. And in the end, he wins the tournament, gets the girl
and saves the house. And as ridiculous as the movie may be, it’s still a story
about what’s possible when you trust your own voice and take responsibility for
the reverberations. Which certainly beats spending your sacred time living in
other people’s worlds and putting your life on hold until somebody stamps your
creative passport. Whose permission are
you still waiting for?