If you don’t write it down, it never happened 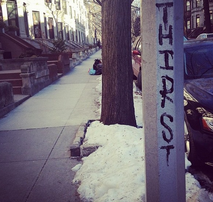 Tom Clancy was the bomb.

Quite literally, in fact.

He wasn’t just the master of espionage and military science;
he also knew a thing or two about being prolific. With seventeen bestsellers and
more than one hundred million copies of his books in print, he was one of the
most successful thriller authors of all time.

In the novel Debt of Honor, the main character finds himself at a high stakes political meeting,
attempting to restart the nation’s economy after an attack by a formerly
friendly nation. Addressing the chief of staff, he says the immortal words:

If you don’t write it
down, it never happened.

When I first heard this phrase, it had a profound effect on
my creative process. It taught me to stop trusting my memory and start managing
my creative workflow intelligently. To train myself to become an informational
virtuoso who’s fast, responsive, proactive, organized, and never lets a single
idea get away. It taught me never to encounter inspiration without picking its
pocket.

And now, as a result of this training, when an idea crosses
my path, I am ruthless.

My sixth sense will pick up on ideas before they even hit
the ground. Even if they show up unsuspected and unforeseen, I will seize them
with the devastating swiftness of creative ninja who’s so fast and efficient,
that by the time his opponent realizes he’s just been decapitated; the ninja is
already down the street drinking green tea.

Because if I learned anything from watching ninja movies as
a kid, a true mercenary practices the art of invisibility. He leaves without a
trace. He burns himself completely.

If you want to hone your ability to process information with
that kind of speed, the first step is to relieve yourself of any and all
editing duties. To retire your red pen.

This is a serious mental block that thwarts the creative
process. We waste time and energy trying to judge if a particular idea is good.
But that’s not our job. As artists, our job is to treat everything we encounter
with deep democracy, fundamental affirmation and radical acceptance. Never
meeting an experience with a tilted head.

Without this posture and way of seeing the world, we become
the type of people who think, well, if I forget something, I didn’t need to
know it. The silent dialogue in our head says, that’ll never work, that’s stupid, I can’t use that, that’s not
logical, I’m not allowed to do that, I should really wait until I have hard
data, so we walk through the world thinking that most great ideas are just
waiting to be talked out of.

And it becomes an infinite progression of confirmation bias.
We begin to favor information that confirms our beliefs, selectively documenting
only those ideas that support our existing position of what a good idea is.

Mitch Hedberg used to have a great joke on this:

“Sometimes in the middle of the night, I think of something
that’s funny, so I go get a pen and I write the idea down. Unless the pen’s too
far away, and then I have to convince myself that what I thought of wasn’t
funny.”

Ultimately, if you want hone your ability to process
information quickly and manage your creative workflow intelligently, the first
two steps are to stop trusting your memory and stop editing.