Don’t talk to people on the subway, it’s in the handbook 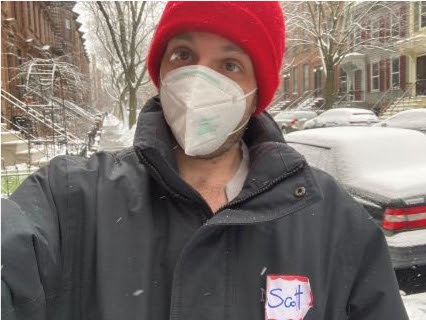 Wearing a nametag on a crowded subway during rush hour is fascinating experience.

Because in most big cities, people are expert at ignoring others. They’re trained at pretending that other people don’t exist.

And so, if you try to strike up a conversation with someone you don’t know, that person will likely treat you like you’re either unhinged or trying to get a date.

It’s a violation of social norms.

As our landlord joked with us when we first moved to the city, don’t talk to people on the subway, it’s in the handbook.

But although fellow commuters will rarely use my nametag to start a conversation on the subway, there is a subtle interaction that happens about once a week.

Initially, the person on the train will make eye contact with me. Once they establish first contact, they silently motion with their index finger towards my nametag, awaiting my realization that I’ve mistakenly left this sticker on my clothes.

At which point I will offer one of two responses, depending on what kind of mood I’m in that day.

The first option is to simply smile and give them the thumbs up, as if to thank them for assisting me in saving face.

However, if I’m feeling a little sassy that day, I’ll stare them down across the train as I slowly open the left side of my jacket and direct their attention to the second nametag on my shirt.

It’s a priceless moment. People either crack up laughing or immediately avert their eyes and try to locate the nearest exit.

The irony of this whole situation is, connecting with others increases happiness, and yet, strangers in close proximity routinely ignore each other.

But we don’t have to. In fact, it’s to our benefit not to.

There’s an interesting study from the journal of experimental psychology that found people are much happier on their commutes when they engage another passenger in conversation.

Does that mean we have to talk to every person on every train? Absolutely not. Especially if their armpit is resting on top of our ear.

It does make you wonder, though. Loneliness has become the most common ailment in the modern world.

And if people in the biggest and busiest city in the world are willing to break the silence over something simply like nametag, the possibilities are endless.

LET ME ASK YA THIS…
How many people did you go out of your way to ignore yesterday?