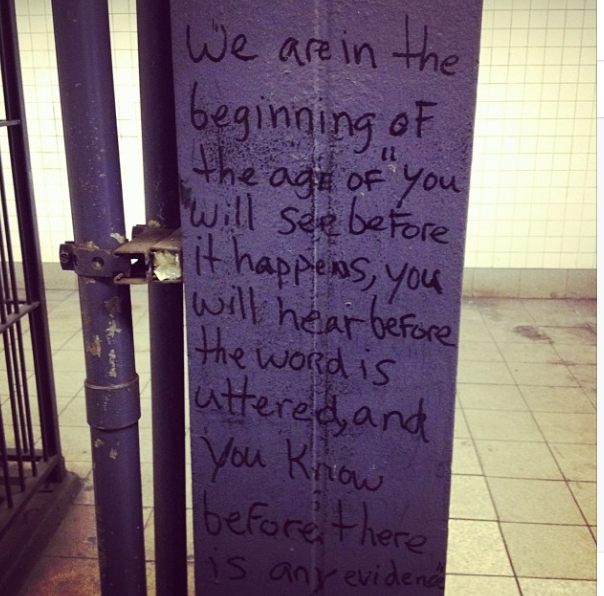 Blank
pages are the enemy.

If you want to consistent
generate compelling content, the trick is to ensure that there’s something
going on all the time, not just the moment you sit down and decide to start working.
To assure your process of creation isn’t driven and dictated by time pressure
alone. To insure that your instrument is finely tuned for the world to move
through you.

Which
means, you have to dig your creative well before you’re thirty.

George Carlin
was a thirsty guy. In a posthumous book about his prolific creative process, he
explained that his brain got used to the fact that casting about for new material
made it feel good. And so, it started networking on its own, making connections
and comparisons, and pretty soon there was an automatic process going on all
the time, one that left out unimportant or less interesting areas so it could
concentrated on areas it trained itself to passively look for.

But the
human brain loves this.

George
says it’s a goal seeking, problem solving machine. And by feeding into it the
parameters of what you need or want or expect, it starts to do a lot of work
without you even noticing. Because that’s what the brain does. It forms neural
networks. And if you train it correctly, areas of your brain will start to
communicate with one another as they notice ideas that belong together.

You’re
no longer working on material; the material is working on you.

Samuel Sinclair Baker popularized the term about fifty years
ago. Born to immigrant parents over a century ago, he became a famous
advertising executive in his first career, an original founder of Miracle Grow
in his second career, and a bestselling author of diet and gardening books in
his third career.

Prolificacy was literally second nature to him.

I bought his book, Your Key to Creative Thinking, at a used book fair for one dollar. And once I
read the back cover about his mental strategies to help people reach greater
heights of productivity than they ever thought possible, I was sold.

Unconscious rumination, he says, is when you let your mind
have fun occupying itself with a variety of ideas, so that the subconscious
impressions combine with your conscious efforts and realizations. You allow
your inner mind to get to work mulling over, sorting out, organizing and
categorizing material that has been previously absorbed. And over time, your
inner brain, that’s been working on a solution while you’ve been applying
conscious thinking in other areas, speaks up. That way, the idea you want
emerges at a time when the mental spotlight isn’t on it.

I’ve personally watched this process play out in my work as
a musician.

Twenty plus years writing songs, and I still find myself
dumfounded as to where certain lyrics and melodies and rhythms come from.
Apropos of nothing, I’ll be in my studio and spontaneously start strumming or
singing or tapping my foot in a really interesting way and say to myself, what the hell, where did that come from?

Long before I stepped into the studio that day, my mind had been unconsciously
churning away, gathering pieces of melody and lyric together like a musical jigsaw
puzzle. Because the seed of any idea, sorting itself from others, may
take weeks or even years to germinate and come to the surface, fused with later
observations.

It only
seemed that it was instantaneous.

You’re no longer working on material, the material is
working on you.

Digging
your creative well before you’re thirsty, then, is a passive process. It’s an
unconscious experience that happens independent of your effort, since the brain
seems to enjoy working alone a lot of the time.

But you’re not completely off the hook.

You still have to accumulate reference files for your brain
to work on. And you have to make yourself hyperaware of unconscious rumination. And in time, you’ll soon find that consistently generating compelling
content won’t be as hard as people make it out to be.

Who needs a blank page
when you’ve got a bustling brain?

Get Your Idea to Ground Zero
If you don’t write it down, it never happened
How to Get Your Career on the Runway