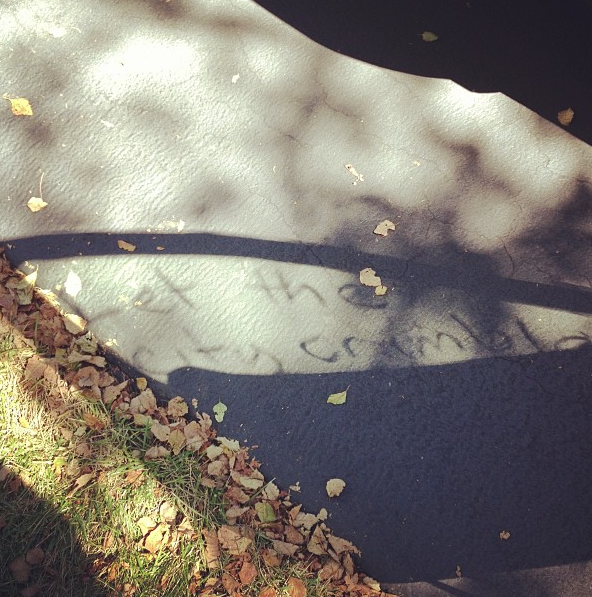 “Let the flood come and clean up the debris as it
smacks you in the head.” Sandy left us untouched. Our neighborhood had zero damage.
In fact, we almost felt guilty nothing happened to us. To the point where
we furiously donated canned goods, cleaned up the park and offered whatever
help we could. Poor city. What a tragedy.
Looking back, though, something did happen. Right before the storm, we had
hit a low point. Emotionally, financially, professionally, you name it. And we
thought all hope was lost. But then the storm came. And the storm went. And by the
time the water receded, both of us miraculously had new jobs, new attitudes, new friends and
an overwhelming sense that everything was going to be okay. As if the water had washed away that season of our
lives and completely renewed us. Don’t you just love nature’s agenda? Floods, after all, are devices that
start the world over again. They’re a sort of baptism for the planet. They reincarnate new life. Let the city crumble.

“Generosity does not have
to be financial to be memorable and important.” Gift giving is my love language. My theory is, if it takes less than fifteen minutes or cost
less than fifteen dollars, it’s worth it. There’s just something about that small,
thoughtful, creative, unexpected gift that lights people up, makes them feel seen and lives in
their memories forever. When my grandpa underwent shoulder surgery, I stopped by the
costume shop and bought him a severed arm to scare the nurses in the hospital. When we hired a new designer from Florida, I picked up a
bottle of fresh squeezed orange juice and left it on his desk. That’s how easy generosity is. Take a moment, make a memory. Just a few minutes, just a
few bucks. The resulting gift is the single drop of epoxy that keeps our relationships glued over time. Inspired by The Prosperous Heart.

“Put a structure in place that tips the odds heavily in
your favor.” It’s all in the approach. That seems to be the answer to
most of life’s strategic questions. Whether it’s sales, physics, design, dating
or marketing, how is just as important as what. I remember when I went looking
for a job for the first time. Something told me I needed more than just a
resume, I needed a plan. A differentiator. A side road. Otherwise I’d tumble
down the employment rabbit hole of interviews and callbacks, forever imprisoned
by the tyranny of being picked. And then one day it hit me. Why bloody my
knuckles on a door that wasn’t going to open, when I could strategically jam a
wedge of generosity into the frame? Instead of waiting around to get called back for an
interview, I reversed the process. I found fifty companies I wanted to work for and started interviewing them. Then I posted the transcripts on my blog. Then I promoted the hell out of them. Then I stopped by their offices in person. Then I gave them a copy of my book as a thank you. And when the time came to ask for a job, all I had to do was go where the door was already open and walk right in. What’s a resume?

“Choosing between work that’s paid and work that’s interesting.” I used to think meetings were the bane
of my existence. They’re boring, wasteful, pointless and soul sucking, I’d
complain. But then I had an epiphany. I realized just because you go to a
meeting, doesn’t mean you can’t create meaning. And since I do so by creating and
relating and working and contributing, I stopped whining and started writing. Now,
meetings have become opportunities to take copious notes of all the insights
people don’t realize they have, print out copies for everyone when our time is
up, physically deliver people’s words back to them and sit back and watch their
face change shape. That’s enough meaning to hold me over. That’s how
I reconcile sitting in a room for two hours. We do what we have to do to make
it okay for ourselves. Meaning is made, not found.

Keep Your Eye On The Ball And Let Your Mind Go
Win A Free Copy Of Nametagscott’s New Book When You Buy Jeffrey Gitomer’s 21.5 Unbreakable Laws of Selling
Don’t You Want To Be Around People Who See You?