Don’t You Want To Be Around People Who See You? 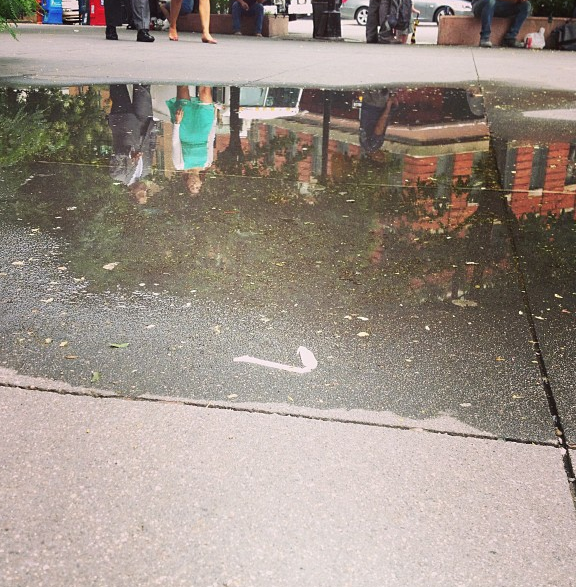 “So many questions behind your eyes.” My nametag is my filter. It’s what’s I use to make sense of the people I meet. Yesterday I met a prospective client at their office. After we all exchanged intros and shook hands, the woman to my left asked about my nametag. I told her I always wore it. She smiled and asked, “Really? What’s behind that?” As usual, I offered up the ten second version of my story, we all had a nice laugh, and the meeting pressed on. But I couldn’t help but reflect on her question. What’s behind that? I’ve been wearing a nametag for five thousand days, and I rarely hear those exact words. That’s a leader’s question. That’s pure curiosity. That’s someone with a lot of practice making people feel heard. Sure enough, I found out she was the executive director of the organization. Proving, that if you ever want to know who the most powerful person in the room is, just listen to people’s language. Inspired by a passage from Dead Sleep.

“There’s nothing like being
tossed into necessity to figure out who you are.” I’ve moved across the country twice in my life. The first time after college, the second time a decade later. And both experiences taught me volumes about who I was. There’s
something about the gravity of physical displacement that invites your truth to
bubble to the surface. Proving my theory, that the best way to find
yourself is to freight yourself. But here’s the distinction. The first time I moved, I was
alone. Nobody to depend on but myself. And that solitude exacerbated the level
of emotional, existential and mental pain. The second time I moved, I was with my wife. Radically different
experience. Our partnership may not have prevented any storms, but it certainly
gave us a surfboard when the waves of anxiety came crashing in. The point is, there are no truer mirrors than the ringers we
squeeze ourselves through. But the reflection is a million times easier to look at
when somebody you love is standing at your shoulder. Inspired by aninterviewwith Maria Popova.

“Don’t you want to be around people who see you?” Historically, home wasn’t just the place people stood under. It was the place people were understood. It was the community that extended the spirit of belonging through the
practice of psychological visibility. A few thousand years later, not much has changed. We still need to
be seen. We still need our lives to have witness. But we seem to have lost our
ability for analog connection. You know, that whole thing where we look people in the eye and
touch them with our hands and actually talk to them with our mouths? Nothing but a quant relic of the past. This bothers me because I know how much it hurts not to belong. As
someone who never really fit in anywhere, I know of the permanent damage alienation can
do to the psyche. So when it comes to hospitality, I kind of overdo it. Not just because it’s part of my personality
and value system, but because I believe in giving what you need.

“Having a way with people is a lost art.” We can’t exactly list generosity on our resume. Same goes for warmth, encouragement, bravery, empathy, initiative
and all the other intangible arrows in the emotional quiver. Our culture has simply conditioned itself to value the
calculable. If it don’t make dollars, it don’t make sense. Which is too bad, because quite often, what can’t be
measured, matters. It is the unquantifiable component of the human repertoire
that has the biggest impact on the people around us. I once worked with a girl who had more brains in her pinky finger
than I had in my whole head. We’re talking genius level thinking here. And the cool part is, that wasn’t even her strongest skill. Sure, she was smart. But we’re all smart. Kelly had a way with people. And there’s no advanced degree for that. You either have it, or you don’t.

Let Me Suggest This: 156 Rants, Riffs and Real World Strategies on Business, Branding, Belonging and Believing
Three Brags About Engineering Genius Kelly G. Hering
Zen and The Art of Wearing Nametags: How I Achieved Social Enlightenment Through A Silly Experiment