Why I Would Make a Terrible Criminal 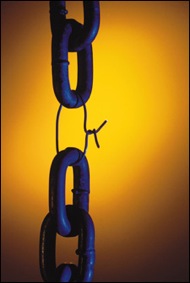 “But if you wear a nametag all the time, doesn’t that mean you have to be nice to everyone?”

Wearing a nametag paints me into an accountable corner.

And that it makes it very difficult to be disrespectful to people. Especially strangers.

I’m reminded of a nightmare I had about seven years ago.

In the dream, I had murdered someone. I was on the run from the cops. But for some idiotic reason, I thought it would be a good idea to stop for a Slurpee.

Rookie mistake.When I approached the counter to pay, the cashier was watching the news. And sure enough, on the screen was a picture of me, my nametag and a graphic that said, “Convicted Killer.”

It didn’t take long for him to put two and two together. By the time I walked out of the store, cop cars, officers, helicopters and Tommy Lee Jones were waiting to take me in.

So much for my career as a criminal.

Fortunately, wearing a nametag is a construct. It’s something I put in place that limits me to only practicing positive behavior. It takes away all my choices. And it permanently positions me in a situation where acting in accordance with my values is the only plausible course of action.

LET ME ASK YA THIS…
What structure could you install to bankrupt bad behavior?

Eight Things You Never Have to Do
What My Nametag Taught Me About Anonymity
NametagTV: The Scaling Fetish