What My Nametag Taught Me About Anonymity 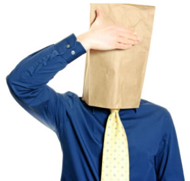 I once met a cowboy on the Dallas airport shuttle.

He asked if I knew I was still wearing a nametag, and said I wore it all the time.

“I’d hate to wear a nametag all the time,” he smirked, “because then I’d have to be good.”

That was the moment I learned a lifelong lesson:Anonymity is the death of civility.

The first comes from a 1976 issue of The Journal of Personality and Social Psychology.

Concealed scientists observed thirteen hundred children during trick or treating. The variable group of children was given an opportunity to steal candy.

What did their research prove?

Significantly more stealing was observed under conditions of anonymity.

Interesting. Would you steal if people couldn’t see your face?

The second study was conducted in 1970 by famed social psychologist, Philip Zombardo.

He wanted to see how physical anonymity lessened inhibitions. He dressed New York women in white coats and hoods. They were asked to give electric shocks to unknown patients.

Of course, the shocks weren’t real, but the fake nurses didn’t know that.

What’s interesting is, only half of the nurses were given nametags for their lab coats. But the women who didn’t wear nametags actually held the shock button twice as long as the ones who did.

Interesting. Would you inflict pain on a stranger if she could read your name?

Sign your work.
Take a stand for your identity.
Give people the priceless gift of security by letting know whom they’re dealing with.

Otherwise, you retreat into depersonalization and namelessness. You take less responsibility for what you do and say. And civility goes out the window.

As technology accelerates, as population increases and as face-to-face interaction decreases, the temptation to engage from a place of anonymity is greater than ever before.

LET ME ASK YA THIS…
Are you anonymous?

NametagTV: The Scaling Fetish
Awesome St. Louis Couple Takes Relationship to Next Level By Relocating to New York City
How to Live Like a Rationalist, Part 2