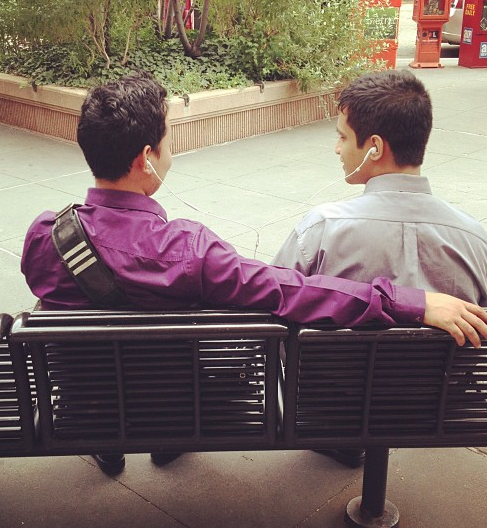 “There is creation inside them, but they won’t set it free.” My guitar strings never used to break. I would play for
hours at a time, night after night, month after month, coating the bronze with
layers of dirt and blood and dust and sweat, and still, the strings rarely ever
snapped. And then last year, I started playing standing up. Mainly because I saw the
musical Once, I wanted to look cool
like Steve Kazee. So I got my ass out of the chair, bought a nice leather strap
and learned to put my whole body into the instrument. And everything changed. Standing
up allowed my voice to go where it was designed to go. Which inspired me to
write completely different types of songs. Which compelled me to publish my
music online. Which urged me to crawl out of musical hibernation and start
performing in public again. Which gave me a platform to play weekly concerts in my neighborhood park. Which forced me to strum harder and louder. Which inspired me write music that was more muscular and soulful. Which started the cycle all over again. Funny what happens when we change our sheer physicality.

“Navigating times of different paced growth.” Backstage work is highly underrated. Having spent the first decade of my career standing in the spotlight, it’s a refreshing change of pace to be working in the wings for once. There’s less pressure to perform and impress, more opportunities to support and encourage, and the experience of stepping back from center stage and lifting others up is gratifying in a way that a standing ovation isn’t. Plus I don’t sweat as much. But there’s really something special about the role of stagehand. It’s a meaningful way to belong to the world. Your work is that of emboldening people. Backing them up at all cost. Assisting their efforts in affirmative and useful ways. Who knew the crew could love the work as much as the talent?

“Simple hospitality is worth its weight in gold.” In a world that seems to have forgotten how to be warm, forgotten how to build social capital one interaction at a time, taking twenty
seconds to extend a welcoming gesture of thoughtfulness has
never been more important. We all know what it’s like to be the new guy. We all battle with the tension between alienation and assimilation. So I’m not saying you have to be somebody’s best friend, but wouldn’t hurt to be theirfirstfriend. That’s all they’re looking for. An on ramp. Someone to help them get started on their journey of belonging. Look, the math is simple. Hospitality so rare, it’s become remarkable. And it costs nothing, but changes everything. That should be enough for us. That should be all the convincing we need. Human beings are a species whose prime feature is its social nature, which means we have a moral obligation to be welcoming to each other.

“The great discipline is simply knowing what season it
is.” I take my cues from
nature. There is no higher
power more honest, more reliable, more ubiquitous, and best of all, more
scientifically proven. It’s not supernatural, it’s just natural. Working under
the immutable laws of her eternal being. Einstein was right. Every
occurrence, including the affairs of human beings, is due to the laws of
nature. And that’s why I
believe in seasons. More than just the changing of the leaves and the melting
of the snow. The word “season” comes from the French saison, which
means, “the right moment, the appropriate time.” That starts to make a ton
of sense when I filter life’s events and trends and patterns through a biological
lens. Upon a little reflection, I quickly realize that whatever is happening in my world, it’s the sun’s fault. And nature never takes it personally.

Soul Is More Important Than Talent
Work That’s Paid Or Work That’s Interesting?
Keep Your Eye On The Ball And Let Your Mind Go