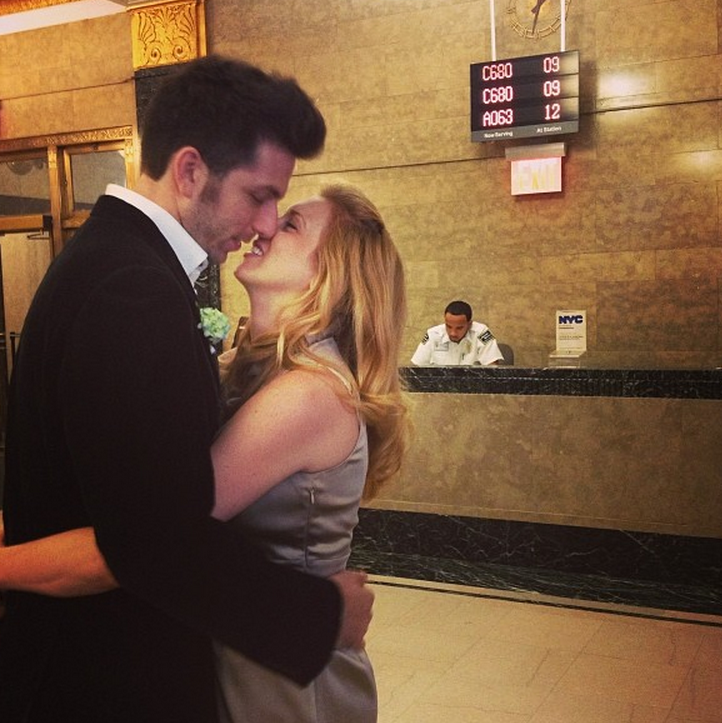 “Love is easier to experience before is has been explained.” Courthouses aren’t exactly romantic. Most of them are cold, sterile, boring government buildings that smell like old paper and make you feel itchy. Then again, it all depends on what you’re doing there. And who you’re doing it with. And why. A week before our wedding, we were required to go to the courthouse to get legally married, since our officiant wasn’t an ordained member of a religious institution. Pretty standard stuff. Our assumption was that it would be a rather loveless experience. I mean, how memorable can a municipal building really be? But when we walked into the great hall, we witnessed one of the greatest displays of love we’d ever seen. Waiting in line were hundreds of couples, of every age, color and gender, holding hands, hugging, kissing and taking pictures, awaiting the moment when their number would be called and their lives would change forever. Now that’s what I call romantic. If making out in a courthouse is wrong, I don’t want to be right. Two hours later, as I carried my new wife over the threshold, out of the building and into the first moments of our married life, I remember thinking to myself. Love is location agnostic.

“Create an epidemic of joy.” I don’t use product. It’s too much work, too much money, too much hassle and my hair doesn’t need
it. I come from a long line of thick manes. The men in my family go all
naturale. But every five weeks, all that goes out the window. Because my stylist obsesses over product. She lives for the stuff. It’s how she geeks out. Lana loves nothing more that
talking up new brands, raving about their innovative ingredients, applying the
strange goo to my head, artfully sculpting each hair and standing back to gaze
at her creation, as if to say with all the pride and fulfillment in the world,this is what I do. Who am I to take that moment away from her? Who am I to rob her of that joy? So I just let her go to town. And my hair usually ends up a little crunchier and waxier than usual, but it
makes her happy. Which makes me happy. It’s a circular transaction. The point is, we have to let people be who they are. If we’re lucky enough to discover what sets someone on fire, we should respond
with gas, not water. Giving someone the chance to lock into their element, even if for a moment, is
an act of love.

“Part of the act of creating is in discovering your own kind.” When someone says your name came up over dinner last night,
it’s usually a good sign. Unless you’re me, in which case, there’s always another story about somebody
saying what a weirdo I am. A girl I know was telling me about conversation she had with her sister. Turns
out, she kept seeing some guy walking around town wearing a nametag, and it was
bothering her. “You mean Scott?” Carrie said. “Sure, I know him. We practice yoga
together. He always wears a nametag. Even during class.” And her sister responded, “Yeah, but isn’t that a little weird?” Well, of course it is, dummy. That’s the whole point. I’m not interested in catering to the normal. People who don’t get the joke are dead to me. I dig weird. I’m at my best when I’m weird. And I like enabling others to become weird themselves.

“We came through the door fists and hearts first.” Our house had a purple door. That was the first feature we noticed when we initially came
to check out the apartment. And I remember thinking to myself­­––even before we stepped
inside for the tour––this is the place.
This is our new home. We’re totally moving here. The color said it all. Purple, the symbol of passion and imagination and mystery.
Purple, the expression of individualism and unconventional thinking. Purple, one
of only a handful of words in the dictionary that nothing rhymes with. It couldn’t have been more fitting for two people like us. I was pretty much sold by the door, but my significant (and
smarter) other thought it would be a good idea to physically walk through the
property we were about to blow all our money on. Fair enough. The minute we walked inside, I knew my intuition was right. The place was perfect. We wrote a
check that day and moved in two weeks later. And we’ve been here ever since.
Couldn’t be happier. And, there’s an interesting postscript to the story. A few
months after we got settled, the landlord told us that every one of the couples that lived in the building before us,
eventually got married. And as of two weeks ago, we became one of those couples. The moral of the story is, follow the color of the door that speaks to your heart. What lies behind it is worth it.