Overachieve From The Very Beginning 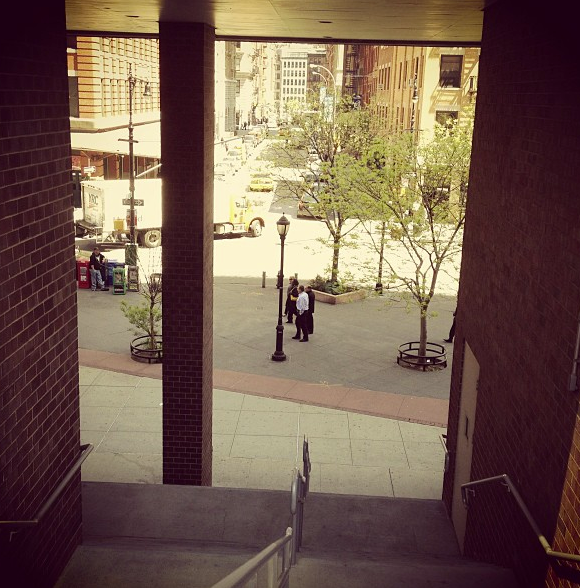 “As an artist, you don’t want a rear
view mirror.” I’ve been writing music for twenty years. Every time I work on a new song, there’s only one goal: Do something you’ve never done before. Whether it’s a chord change, a turn of a phrase, a strumming variation or vocal variety, the song has to contain at least one moment that’s completely new, totally fresh and artistically surprising. The exciting part is, I never know when the moment is going to happen. But when it does, holy shit. I literally feel the beauty in my bones. And from that point on, I’m always excited to play that song, if only to get to that moment. Inspired by yet another Carollarant.

“Find
someone with a touch of the pathology you require, but not so much that it will destroy you.” Love this passage fromWe Learn Nothing. Got me thinking about relationships. First of all, opposites attract, but that doesn’t mean they stay together. I learned that the hard way by dating someone who was the mathematical inverse of myself. Sure, it seems novel in the honeymoon stage, but we can only spend so much time with a partner whose value system doesn’t overlap with ours. On the other end of the romantic spectrum, you don’t want to date yourself. There’s another lesson I learned the hard way. I pursued a woman who was basically me, but with smaller boobs. Also not an intelligent relationship strategy.

“Overachieve from the very beginning.” The smart move is to start fast. To aim for volume right away. You can always scale back later. For example, when we kick off our research and discovery process for a new client, I always go deep early. I’m sure it’s not necessary to watch two documentaries and read the company founder’s book on the first day, but that’s just who I am. Homework is my thing. I find that by overwhelming myself in the beginning of the process, by inhaling as much content as my intellectual lungs can handle, it always pays off somewhere down the road. Inspired by thisarticleabout giving advice to your younger self.

“Security’s hand reaches out and grabs me.” Brilliant caption from a beautiful man. Henry calls himself a love junkie light catcher who’s naively in love with everything. That’s what I love about Instagram: The picture is only the beginning. Once the image infects the viewer, what’s interesting and artistic and memorable are the words that the picture pulls out of the viewer. That’s why I gravitate more to the artist’s statement than to the artist’s stuff. I’d rather read the little plaque on the wall than stare blankly into the canvass next to it. For me, it’s all about the story and the process and the inspiration.

“Stoplights are a suggestion.” That’s how you can tell the tourists from the locals. One looks both ways before crossing the street, the other has an agenda. Which reminds me of the best advice someone gave me about living in New York: This city isn’t hard––it’s fast, rude, cold, and all knowing, but once you break the code, you’re in. Interesting. For us, that acclimation process took a little over a year. Which, from what we hear, is about average. Looking back, I think the hardest part was breaking the code before the code broke us. Close one.

“As soon as you crack your knuckles and open up a comments page, you just canceled your subscription to being a good person.” Louie’sinterviewreminds me why I stopped caring about stuff like that. In fact, I remember the exact moment. About six years ago, my client sent me a stack of audience evaluations from a workshop I had done a few weeks prior. I was standing in my kitchen, in my underwear, staring at the manilla folder, debating whether or not Ireally cared what people thought of my work. But instead of letting one negative review ruin my week, I tossed the folder into the trashcan, got back to work and got on with my life. And I never looked at evaluations again. God damn that was satisfying. Feedback is overrated.

Check That Box Of Belonging Daily
I Came Here To Work, I Didn’t Come Here To Crawl
I’m Going To Kiss Your Ass So You Shut Up