Lessons learned from a job that sucked (part duex) 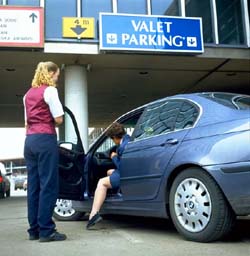 If you haven’t read my first post in this three part series, probably do that first.

During that wonderful period after college, or as I like to call it, “The Two Years When My Business Wasn’t Making Money So I Lived in My Parents’ Basement and Worked a Part Time Job,” I took a nights/weekends position as a valet parker at a local hotel.

(Read how I got hired for this job at yesterday’s post.)

This job wasn’t nearly as bad as bartending or slinging couches, but it still sucked.

And whether I was running full speed for two straight hours during an 80-car wedding in the 105-degree heat, or standing by the lobby door until 2 AM layered in every piece of clothing I had during the biting cold of a St. Louis January, I learned a lot about customer service, business and life:

Whatever the Guest Wants
During training, I was actually instructed to “go to the ends of the earth” to accomidate the guests. A few months later, a guest nobody had ever seen before pulled into the drive in red Chevy Cavalier. I opened the door for him and he said, “Man, this car is a piece of junk!”

I replied with, “Don’t worry sir, you’ve come to the right place – I’ll get you a nice Benz from our garage.”

He laughed and said, “Scott, make it a Bentley and we got a deal!” as he handed me a hundred dollar bill. (sweet)

Later that day I went to the Bentley store and used his tip to buy a toy Bentley replica. I gave it to him the next day. He was so blown away that he 1) gave me ANOTHER hundred dollar bill, 2) became a weekly guest at the Ritz for a year.

I later found out that his name was Nicholas Innerbichler, Forbes Magazine Award Winner and CEO of Fortune 500 company, ESSI Engineering.

LESSON LEARNED: consider the lifetime value of a guest, go to the ends of the earth to make an unforgettable first impression on him and win a loyal customer for life. Because you never know.

Safety Always Comes First
It was late Saturday night. A really, really drunk man stumbled out the front door, looking for his car. He asked for his keys to the white BMW parked in spot #2. I fumbled for a sec, then asked, “Sir, how far away do you live?”

He told me five blocks. I told him to get in the car. I drove him home, parked his car in his driveway, then ran five blocks back to the hotel before anyone knew I was gone.

LESSON LEARNED: better me running than him driving.

5 Minutes Adds Up
My coworkers used to take an average of three smoke breaks a day. That’s 15 minutes a shift, 75 minutes a week, 3,750 minutes a year, 62 hours a year. I, on the other hand, didn’t smoke. (I didn’t get to take breaks like that.) So, I explained to my boss that it wasn’t fair, and asked him if I could request 62 hours of “smoker’s pay” added to my check at the end of the year; or request 62 hours of “smoker’s fee” be docked from my coworker’s checks at the end of the year. He suggested I either took up smoking or stopped whining. I stopped whining.

Names Hold the Key
As the SUV came to a stop, I opened the trunk and pulled out the guest’s suitcase. I noticed from the luggage tag that the man’s name was Mr. Potashnick. When he opened the car door I said, “Good morning Mr. Potashnick!” He smiled and asked, “Now how in the hell did you know my name?”

I smiled back and said, “Sir, that’s why we call it Guest Service!”

He handed me a twenty.

LESSON LEARNED: get that name quick, and get it however you can.

Or, Names Hold the Poison
Another time I inspected the luggage tag and noticed his name was Harrison. “Welcome in Mr. Harrison,” I said as I opened the door. A few seconds later I went around to the passenger side and opened the lady’s door. “Mrs. Harrison, welcome in!”

She looked at me with the dirtiest scowl I’ve ever seen.

Because she wasn’t Mrs. Harrison

LESSON LEARNED: only use their name if you’re ABSOLUTELY sure.

The Extra Mile is Rarely Crowded
During a 200 person wedding, the father of the bride gave me party favors for all the guests. They were little glass slippers, as the theme for the wedding was Cinderella. He told me to hand them out at the door at the end of the night. Knowing I would be too busy to attempt it later, I spent two hours during the wedding when I had no cars to park placing the shoes on the dashboards of every car. When I opened the door for the guests as they left I said, “Thanks for joining us, and here’s a little gift from Cinderella and Prince Charming.”

My boss receive 8 phone calls from wedding guests who said it was the best valet service they ever had.

LESSON LEARNED: make sure every guest leaves with an unforgettable LAST impression.

Numbers Don’t Lie
During a busy month, I had a problem with my schedule. See, I was a part time employee, yet working WAY too many shifts and hours, proportionate to the other full time employees.

So, during a staff meeting with the GM, I asked for five minutes to explain my problem. I made handouts of my department’s schedule and passed them out to the entire staff. It showed that, for a period of 10 days, I worked 9 days straight, for a total of 54 hours. Then it showed how every other employee in my department worked no more than 7 shifts and 49 hours (including full timers.)

After my 5 minute tyrade, the room fell silent. The GM didn’t know what to say. So I walked out, went back to work for the rest of the day, then quit the following week.

LET ME ASK YA THIS…
What lessons have you learned from jobs that sucked?