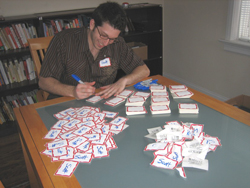 Every day when I slap a new nametag on my shirt, I remind myself of what Einstein once said:

“If at first your idea is not absurd, there is no hope for it.”

FACT: Einstein’s greatest scientific discovery sparked from a mental picture he had when he was 16 years old.

One day, while taking a walk, Albert envisioned himself riding atop of beam of light into outer space, traveling at 299,792,458 meters per second.

Which helped him create the Theory of Relativity.
Which changed the world of science forever.
Which earned him the Noble Prize.
Which made him pretty much the smartest dude of all time.

All because of a totally ridiculous, totally humorous image.

Now, I’m not trying to compare myself to Einstein.

In the book How to Think Like Einstein, author Scott Thorpe explains how this principle of melon motivating works:

“A brain has a mechanism that is the mental equivalent of an immune system – it rejects ideas that are foreign to it. But humor suppresses your mental immune system. So, if you treat a new idea humorously, you will be able to explore it more thoroughly because you wont immediately reject it. And your mind will be free to make other absurd connections with the seed idea, generating more concepts for solutions.”

How many crazy ideas have YOU had this week?

The answer is probably “not enough.”

ANOTHER FACT: as an entrepreneur, ideas are your major source of income.

So, a HUGE component of your professional success will be a function of three things:

Wanna start thinking like Einstein and turn absurdities into antidotes?

1. Observe. Grow bigger ears AND eyes any time someone says, “That’s funny,” “That’s weird,” “No way!” “Cool!” “You’re out of your mind!” or “Get the hell outta here!” This is your first indication that an absurdity might become an antidote.

2. Write it down. My three principles of idea capturing are always the same: 1) If you don’t write it down, it never happened; 2) That which goes unrecorded goes unmemorable; and 3) Writing is the basis of all wealth. So, just remember: every time you choose NOT to write your absurd idea down, you’re losing money.

3. Stick with it. Einstein once said, “I’m not smarter than anybody else, I just stick with it longer.” So, understand that your absurd ideas WILL be met with resistance – from coworkers, bosses, colleagues and competitors, even friends! And odds are, that resistance stems from jealousy, ignorance, fear, or some combination thereof. Which basically means, don’t sweat it. Instead, stick with it!

If you can remember those three keys, you’ll be certain to turn absurdities into antidotes!

Now if you’ll excuse me, I have to go wash the adhesive gunk out of the upper left side of all my shirts.

LET ME ASK YA THIS…
Are you turning absurdities into antidotes?

LET ME SUGGEST THIS…
Think about your three craziest ideas, and what each of them led to. What commonalities do you observe?

Approachable Service: 18 Ways to be UNFORGETTABLE!
21 alternatives for the word “but”
What if you only sold ONE thing?