Be SO good that customers can’t even tell 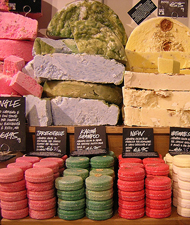 Walk into any Lush store around the world, and most customers will have the same response:

“These guys are SO good, their soaps don’t even look like soap!”

When was the last time YOU took a picture of SOAP?

But the people at Lush are just THAT good.

Tune in to The Ace of Cakes on Food Network (Staring culinary arr-teest Duff Goldman), and most viewers will share the same thought:

“That dude his SO good, his cakes don’t even look like cakes!

When was the last time YOU took a picture of a CAKE?

Unless it was a wedding, probably never.

But Charm City Cakes are just THAT good.

LESSON LEARNED: As Michael Cane said, “The art is hiding the art.”

And I think you can apply this principle to a variety of situations:

CREATE marketing that’s SO fun, SO cool and SO participative…
That your fans don’t even realize you’re marketing to them.

SELL your stuff with SUCH passion, SUCH comfort and SUCH service…
That your prospects don’t even realize you’re selling to them.

PERFORM sp effortlessly, SO naturally and SO emotionally…
That your audience doesn’t even realize you’re performing for them.

WRITE so engagingly, SO well-architected and with SO much personality…
That your readers don’t even realize they’re reading.

BUILD community that’s SO organic, SO authentic and SO inviting…
That your members don’t even realize they’re members of an organization.

It just means being really, really good and doing what you do.

That’s what being That Guy is all about.

So good that people get lost in your brilliance and don’t even realize you’re doing what you do.

LET ME ASK YA THIS…
Who do YOU know that’s so good at doing what they do, people can’t even tell?

LET ME SUGGEST THIS…
Share your best example here!

How are YOU making the mundane memorable?

Tune in to The Frontline Channel on NametagTV.com for video lessons on creating and keeping insistent customers!