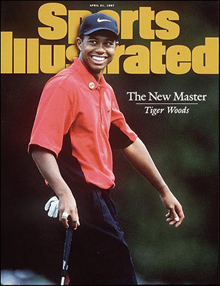 You’re the youngest person in your office.

Consider the plights of these five Young Pups:

1. Napoleon Bonaparte was an artillery captain at 23.
2. Charles Lindbergh was the first man to fly across the Atlantic Ocean at 25.
3. Alexander the Great conquered the known world at 26.
4. Eli Whitney perfected the cotton gin at 28.

And of course, my favorite…

In 1997, Tiger Woods shocked the nation by winning The Masters Tournament by a whopping 12 strokes.

So, do you think Tiger, as he slipped on that coveted green jacket, cared how old he was?

Do you think any of the other players on the course that day cared how old he was?

And do you think any of the millions of golf fans watching on TV cared how old he was?

Because it’s not the years, it’s the mileage.

Because actions speak louder than years.

And because abilities trump age, any day of the week.

LET ME ASK YA THIS…
Who’s your favorite Young Pup?

The Nametag Guy gives away his 4th book for FREE!
7 reasons (excuses) for NOT writing
It’s All About the Sticker: 7 Ways to Enshrine Your Business