Why you should set fire to your television 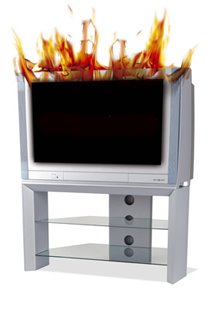 During my sophomore year of college, my roommate Ted decided to transfer mid-semester.

Fortunately he was he was a total jerk and a drug addict who didn’t respect my personal space, so that worked out well.

Anyway, when I returned from class one day, he was gone. His clothes, his posters, everything was gone.

Initially, I was scared.

No TV? How will I watch Dawson’s Creek? This is terrible! (Shut up. It was a great show.)

But after a while, I stopped missing it. I found other constructive ways to spend (er, invest) my time, namely, reading books.

After a few TV-less month had gone by, I realized that I was more energetic, more productive, and in general, happier than I’d been all year! Not to mention all the cool stuff I’d learned from reading.

As it turns out, I was onto something. A few weeks later one of my mass-com professors shared two sets of fascinating statistic with the class. The first set came from AC Neilson.

• The average American watches more than 4 hours of TV each day. In a 65-year life, that person will have spent 9 years glued to the tube.
• The number of murders seen on TV by the time an average child finishes elementary school is 8,000
• The number of violent acts seen on TV by age 18: 200,000
• The number of 30-second TV commercials seen in a year by an average child: 20,000
• The number of TV commercials seen by the average person by age 65: 2 million
• Rutgers University psychologist and TV-Free America board member Robert Kubey explained that television that heavy TV viewers exhibited five dependency symptoms – two more than necessary to arrive at a clinical diagnosis of substance abuse. These included: 1) using TV as a sedative; 2) indiscriminate viewing; 3) feeling loss of control while viewing; 4) feeling angry with oneself for watching too much; 5) inability to stop watching; and 6) feeling miserable when kept from watching.

The next set of stats came from Para Publishing:

Now, you might be skeptical when reading such statistics. (As you should be. After all, 73% of all statistics are made up on the spot.)

But whether or not the numbers are accurate, the lesson is obvious:

Me, I’m up to about three books a week. When you travel as much as I do, that’s an easy task.

Need somewhere to start? Here’s what I’ve been reading lately:

All great ways to invest (not spend) your time.

Open a book and you will open your mind.

Except for South Park. Big ups to Matt and Trey for making it to Season 10!

LET ME SUGGEST THIS…
Set a goal to read at least 12 books a year. Start your list today. If you’d like a list of 194 Great Books to Read in the Next Five Years, email me and I’ll send it to ya.

What’s the mark of a job well done?
Marketing lessons learned from the dating world
Find out where you suck