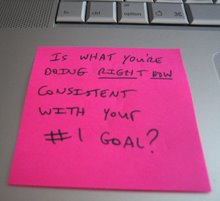 I remember being stuck.

I was stressed. I was frustrated. And my company wasn’t making any money for the third year in a row.

Then I listened to Earl Nightingale’s The Strangest Secret before going to bed one night.

In his program, he advises you to take the one thing you want more than anything in the world and focus all of you efforts on attaining it.

For me, it was to move into a new house and reach my target income goal within a year.

So, I took Earl’s advice. I wrote down my goal on a little nametag and kept it in my wallet. I looked at it several times a day. I told everyone in my mastermind group about it. My friends even bet me $20 that I would be able to accomplish it.

And on January 1st, I set out to achieve my goal by December 31st.

Miraculously, I hit that goal mid-July.

It was truly amazing.

So, thanks to the prompt from Curt’s Collective Genius Blog, here are my three cents on getting unstuck:

What gets people stuck: running in place and not doing anything about it. Not setting goals. Not focusing on “that one thing.”

Why people stay stuck: because they’re part of the 90% of the world who doesn’t a) set goals, b) write them down, and c) look at them daily.

How people can get unstuck:

1) Tell people who are important to you that you’re stuck.

2) Walk with the wise. Surround yourself with those who aren’t stuck.

3) Watch the movie The Secret.

5) Put a sticky note on your computer that asks you, “Is what you’re doing RIGHT NOW consistent with your #1 goal?”

Good luck. May the Schwartz be with you.

LET ME ASK YA THIS…
How did you get unstuck?

LET ME SUGGEST THIS…
On a small card, write down the one thing you want more than anything, and the date by which you’d like to have it. Look at it several times a day. Commense getting unstuck.

Why you should set fire to your television
What’s the mark of a job well done?
Marketing lessons learned from the dating world