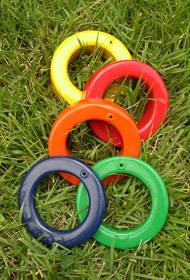 Of course you do.

Of course you do.

The On-Deck Donut was created in the 1950’s. This piece of heavy rubber-like material usually weighs a few pounds. Batters swing with it during warm-up in the on-deck circle.

Its original purpose was for a hitter to swing it to loosen and strengthen up. He would then take it off and the bat would magically feel lighter.

This is also known as “deceleration training.”

Interestingly, baseball magazines and message boards support an entire science around these donuts.

So, it’s way more than just a piece of rubber.

It’s a tool.
It’s a ritual.
It’s an essential practice for performance improvement.

HERE’S THE THING: whether or not you actually play baseball, you can still warm up your PROFESSIONAL performance with an On-Deck Donut of your own.

Stay with me here…

And you’ve been assigned the client from HELL.

They’re high maintenance, impossible to get a hold of, and worst of all, impatient.

So, during the whole project, you’re thinking, “Why did I get stuck with these jerks? This is SO not worth it!”

Not so fast, Babe Ruth.

HERE’S THE PLAY: think of this pain-in-the-butt client as your On-Deck Donut.

Sure, they’re a little heavier and harder than what you’re going to face in the future.

But that’s good! Because:

AND THE BEST PART: every other client from here on will seem easier to deal with.

Because you’ve already warmed up, prepped your body and psyched your mind.

LET ME ASK YA THIS…
What’s YOUR On-Deck Donut?

LET ME SUGGEST THIS…
Think back to the worst client you ever had. Consider how that experience paved the way for future business.