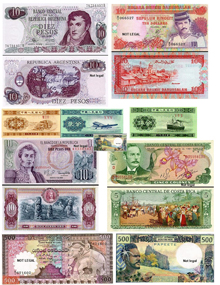 Not the yen.
Not the dollar.
Not the deutschemark.

Today we’re talking about the metaphorical form of currency.

1. Currency is the transmitting of something, especially money from person to person.
2. Currency is just another word for “return.”

THEREFORE: You need to know ahead of time, prior to engaging in any new project, marketing effort or activity, “What’s my currency?”

In other words, “Why the heck am I doing this?”

Because if you don’t…

SO, ASK YOURSELF: “What would have to happen to make me feel like I’ve achieved a Return on Investment from this new endeavor?”

Too many companies and businesspeople hesitate to get involved with this trend because they think it’s a fad. That it will just fade away like mini-discs, pogs and Ricky Martin.

And the reasons (excuses) people give for not getting involved in social networking are:

You WILL have the time…

For online social networking, potential currency could be:

I never thought blogging was worth it. For about a year, I didn’t see any return, any “currency” from my daily posting.

If that happened to you, would YOU make time to blog every morning?

So whether it’s online social networking, initiating a new marketing plan, attending a conference or deciding to publish a book, understand this:

It might take six to twelve months before you actually see your currency come to fruition. Heck, that’s the “I” in Return on Investment!

So, be honest with yourself and your business. Find out if you’re willing to pay the price.

LET ME ASK YA THIS…
What’s your currency?

The longer they take, the less they buy
Why are you being so nice to me?
8 phrases customers (don’t) want to hear you say