What Most Young Leaders Overlook, Part 2 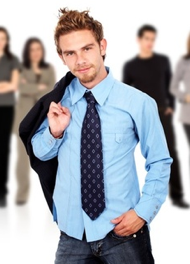 Sometimes, it sucks being the youngest guy in room.

And by “sometimes,” I mean, “Every excruciating hour of your workday.”

Nobody takes you seriously. The world refuses to listen to your voice. And the people you work with are twice your age, have three times your knowledge and four times your experience.

Instead of going postal on your entire office with a semi-automatic machine gun (which isn’t as effective as it sounds) here’s part two (part one here) of strategies, practices and practical advice on making a name for yourself as a young professional:1. Crystallize your timeline of credibility. If people aren’t sure whether or not to trust you, they’ll ask one question: “What measurable success has this person achieved?” And if you don’t have an answer – on paper – you will be ignored.

Try this: Document your achievements. All of them. Because if you don’t write them down, they never happened. Ever. What’s more: Keeping a paper trail of past victories – no matter how inconsequential they might seem – reinforces that you’re an employee who produces results.

That’s evidence of promotability, baby. And you’ve got to showcase that value. Otherwise you’re just winking in the dark.

Remember: You don’t need to screw the boss in the supply closet to move up. Consistency is enough to qualify you. Like I always say, “When you’ve written twelve books, people stop asking how old you are.” How will you send a credible signal?

2. Actively champion your own growth. When I first showed up at my professional association, I was the youngest person in the room. By fifteen years, minimum. But instead of slapping down my application for membership, my mentor suggested I take another approach: Show up, hang out, ask questions and shut up.

So I did. And it turns out, that was a much smarter investment of my time, money and energy. What’s more, veteran members appreciated it. They didn’t mind me eavesdropped on their thinking. And after a few years of doing that consistently, I became a board member, then later the chapter president.

Cool lesson: You don’t have to join to be a member. Never underestimate the advanceability of showing up, shutting up and listening louder than anybody in the room.

The only caveat is: You have to let people like you. Because if you put box around yourself and rob people of the chance to know the real you, it won’t matter how awesome you are. How are you counteracting generational stereotypes?

That’s what young professional need to remember: Making a name for yourself means helping others do the same. It’s about being a stand for other people’s greatness. Creating an atmosphere where they can shine.

My suggestion: Step back from center stage. Stop trying to be the life of the party and start bringing other people to life at the party. After all, it’s not who you know – it’s whose life is better because they know you. And that doesn’t mean stop winning; it means help others achieve victory just as often. You will become a voice worth listening to. How do people experience themselves in a relation to you?

As the youngest person in your office, you have an opportunity to bring new blood, fresh perspective and youthful energy to the workplace.

Be patient. Be proactive. Be pointed. And be a problem solver.

And maybe you won’t even need that semi-automatic machine gun after all.

LET ME ASK YA THIS…
How are you leveraging your youth?

LET ME SUGGEST THIS…
For the list called, “14 Things You Don’t Have to Do Anymore,” send an email to me, and you win the list for free!