Taking the shameless out of self-promotion 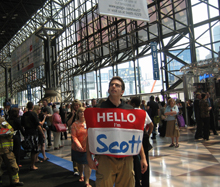 (To watch a video of The Giant Nametag, click here!)

Self-promotion gets a bad wrap.

In fact, it’s almost impossible to talk about the topic of self-promotion without mentioning the word “shameless.”

Which, according to my thesaurus, is another word for “audacious, brash, dirty, immoral, improper, presumptuous and rude.”

Yikes! No wonder people are so hesitant when it comes to tooting their own horns … they’re afraid!

Afraid of being rejected.
Afraid of appearing boastful.
Afraid that they’re bragging.
Afraid of sticking themselves out there.

BUT, HERE’S THE GOOD NEWS: self-promotion doesn’t have to be shameless.

See, our teachers, parents and mentors tell us (er, brainwash us) that self-promotion is bad form.

Self-promotion can be a beautiful thing … when done gracefully.

THINK OF IT THIS WAY: you sit down at a dinner table with seven strangers.

Somebody brings up the topic of children.

“Ooh! Look at these pictures! My daughter just graduated from Kindergarten. Isn’t she just the cutest thing you’ve ever seen? Oh, and she got all A’s and the teacher LOVES her and all the other students in class think she’s the smartest kid in the whole school!”

And you don’t see it as “selling” your kids to the person next to you.

And THAT is what self-promotion TRULY is: a transference of emotion.

At a recent Book Expo in New York City, I spent three days walking around the convention center wearing a giant nametag.

Transferring the emotion of approachability.

Now, sure, I was promoting my new book.

But I didn’t lead with that. I led with passion and love and authenticity.

And the word shameless wasn’t even a consideration.

Interestingly, halfway through the conference, a woman approached me with a big smile on her face and asked why I was wearing this huge nametag.

So I told her.

It turned out she was a reporter for the Christian Science Monitor Her assignment was to interview someone for an upcoming article on self-promotion.

We ended up sitting down on the stairs for the next 30 minutes for an impromtu interview!

So, if you want to take the “shameless” out of self-promotion, remember two things:

1. Don’t let your past fears stand in the way.
2. Don’t sell – transfer your love. Enable people to buy.

Because if you don’t make a name for yourself, someone will make one for you.

LET ME ASK YA THIS…
Does self-promotion have to be shameless?

LET ME SUGGEST THIS…
Share your hypotheses why people are afraid to toot their own horns here!

Ask; don’t tell.
Become an expert at learning from your experiences
24 reasons why content is KING