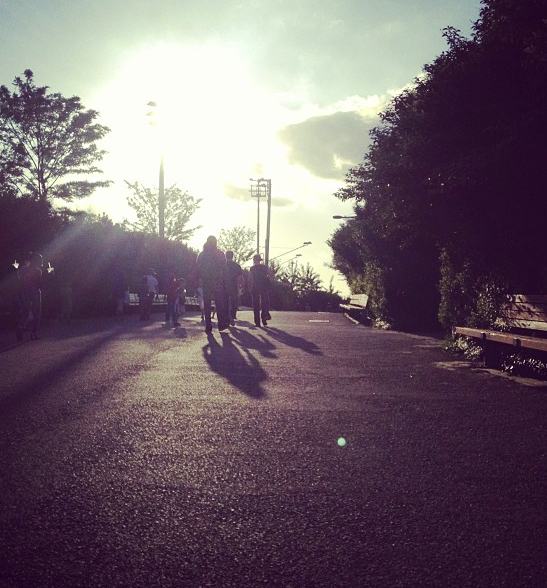 “There’s a very early arc, so you have to be  proactive when
the game is done.” Venus Williams started training when she was four years old. Four years old. So now that she’s starting to wind down her first career, the question becomes, how will she exist beyond the tennis universe? What will three decades of professional sports prepare her to do next? That’s what interests me. The evolving human identity. The struggle to live larger than our labels. The redefinition of work as the primary expression of who we are. Tennis is fun to watch, but it’s not as compelling as the narrative thrust of people who play it.

“A series of notes beyond the range of human hearing.” Daniel Crawford turned a hundred years of climate change data into a stunning musical composition. Amazing level of creative ingenuity. Also, from a messaging standpoint, I like that he’s using music as a side door approach to proving an important point. Fundamentalist wackjobs may be able to argue their way out of believing in climate change, but nobody can debate the reality of classical music. Almost like using a kids book to teach children valuable life lessons, but for adults. Hmm. Maybe that’s how we reach people whose beliefs are too convenient to be killed.

“You have petite sensation, the little feelings you get from
being alive in the world.” When I first started practicing yoga, my intention was mainly respiratory. Having just recovered from a collapsed lung, I needed a healthier relationship with my breath. Six years into it, my practice has evolved into more of an emotional experience. Now, doing yoga is also a daily routine of confronting and working through my emotions. Maybe it’s because the room is a hundred degrees. Maybe it’s because I’m half naked. Maybe it’s because I’m staring at myself in the mirror for ninety minutes. But after a few postures, any feelings that are present, have nowhere to go but out. Inspired by Rafael Black.

“It wasn’t anything radical, but it was
just what the world was looking for.” Great insight from an adorable documentary called The History of Typography. Got me thinking about innovation: Maybe every idea doesn’t have to be some game changing, paradigm shifting, competition befuddling, insanely great innovation that blows the world’s hair back. Maybe all the idea needs is the right combination of utility and timeliness. We spend so much time and money and energy trying to make history, when all people really need is stuff that makes life easier.

“Success by proximity, isn’t.” Achievement through association pisses me off. Just because you’ve interviewed a bunch of successful people, doesn’t mean you’ve achieved success. That’s like trying to get in shape by reading a book about weight lifting. Success isn’t a function of osmosis or proximity. It’s not a communicable disease. Success is what happens when you’re busy creating value. The end.

If We Don’t Capitalize On Ourselves, Someone Else Will
Poised In A Great Ballet Of Expectation
You Get What You Don’t Pay For