“So, how many copies have you sold?” 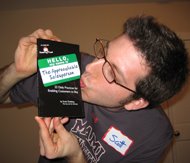 I get that question a lot.

And I’m not sure why.

I guess when (some) people meet an author, that’s the first piece of information they’d like to know.

Or, maybe some people are just SO annoyingly attached to numbers that they simply REFUSE to stamp your creative passport until they’ve been given scientific evidence of your success.

Which is why I usually answer it the same way every time:

“I have no idea how many copies I’ve sold.”

Now, interestingly, some people are REALLY surprised when they hear that answer come from an author.

Like Marty, the guy I met in Starbucks yesterday. Apparently he’d read an article in our local paper about one of my books.

So, naturally, he just HAD to ask.

And when I offered my standard answer, here’s how he responded:

First, he furrowed his brow.
Next, he chuckled slightly.
Then, he asked:

“Well, Scott … I mean, shouldn’t YOU – as a small business owner – um, like, KNOW how many copies you’ve sold?”

“Well, that depends,” I replied.

“First of all, you’re operating on the assumption that ‘number of copies sold’ is how I measure my success as an writer … which it isn’t.

See, for me, success (as a writer) is a function of a few questions:

1. Am I having fun while writing?
2. Are people enjoying my writing?
3. Is my writing contributing to the world?
4. By writing, am I validating my existence as a human being?

If so, great! That means I’m successful. No matter how many copies I’ve sold. It’s about detaching yourself from numbers and outcomes.”

But then (as I stood taller on my author’s soapbox!) I expanded on my answer.

“Also,” I continued, “‘number of copies sold’ is basically an irrelevant statistic IF you practice the philosophy that your book isn’t really a book.”

First of all, sometimes a book is nothing more than a really expensive marketing tool for your business.

Because you KNOW that writing a book adds value for your existing clients, and also delivers value to attract new clients.”

“Now, that doesn’t mean ‘write a book with ZERO substance that does nothing more than cross-sell your other products and services for 130 pages,’” I clarified.

“Because a lot of authors do that,” I said.

“But that’s not what it’s about. It simply means reframing your definition of the word ‘book.’ I mean, I could certainly call my printer and a get a rough number; then again, I give away so many free books, it would be IMPOSSIBLE to know how many copies I’ve sold!”

“Now, here’s my second example of ‘a book not being a book,” I said.

“See, other times, is book is nothing more than a tool for enhancing credibility, legitimacy and expertise. After all, when I started my company, I was 22 years old! Do you really think ANYBODY would have taken me seriously if I didn’t have a book?”

“So, anyway, that’s my long-winded answer to your question. Sorry for the rant!” I laughed.

“Yeah,” I concluded, “I guess there’s just a common misconception when it comes to the topic of ‘number of copies sold.’”

“Well, thanks for explaining it to me. I guess I never thought of it that way,” Marty admitted.

“No problem. In fact, thank YOU for asking! I think I might go home and write a blog post about our conversation.”

LET ME ASK YA THIS…
As a writer, how do you measure your success?

LET ME SUGGEST THIS…
For a list called, “100 People (Not) To Listen To,” send an email to scott@hellomynameisscott.com, and I WILL listen to your request 😉

Not a consultant, coach or therapist.

I’m just someone who listens and challenges your thinking so you can grow your business.

NametagTV: Outtakes, B-Rolls and PSA’s
Yeah, it’s remarkable, BUT…
5 Ways to Position Yourself as a Resource