The problem with tolerance 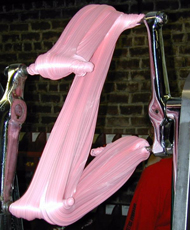 FIRST: “Tolerance” as a word.
It comes from the Latin word tolerare, which means, “to bear or endure.”

SECOND: “Tolerance” as an idea.
The word tolerance was first recorded in 1539, although it wasn’t until 1868 that it was used in the context of “a physiological ability to take large doses.”

THIRD: “Tolerance” as an attitude.
As our country – and our world – becomes more connected and more integrated, our society’s attitude has also become more sensitive.

Too many campaigns for “Zero Tolerance.”

Too many organizations and leaders callously throwing that word around.

And the worst part is, very few people who maintain a “tolerance attitude” don’t give a second thought to the true meaning of the word.

1. If you say that you “tolerate” your spouse, what you’re really saying is, “I suffer when dealing with my spouse.”

2. If you say that you “tolerate” those annoying customers who call you every day (who, by the way, pay your salary) what you’re really saying is, “I’ve grown physiologically accustomed to taking large doses of those customers who call me every day.”

Doesn’t sound very positive, does it?

After all, if YOU were the customer – or the wife, or the partner, or the friend – how would it make you feel if the other person said she had to “tolerate” dealing with you?

So, the word, the idea and the attitude of “tolerance” can send the wrong message.

In Chip Bell’s seminal book on service, Customers as Partners, he discusses the dangers of “tolerance.”

According to Bell, “tolerance” is about sufferance and continual resignation. It’s about endurance and fortitude.

More specifically, he explains three key problems about relationships based on tolerance:

1. Tolerance-Based Relationships maintain a degree of rigidity. They have the volume turned up on every flaw and error.

2. Tolerance-Based Relationships make people suffer in silence. As if they were perpetually pained by partner imperfections. What’s more, they propagate the attitude that, “This unfortunate disruption comes with the territory,” as Mr. Bell said.

3. Tolerance-Based Relationships are exercises in long-suffering. And unfortunately, they assume superiority by one party.

So the challenge, Bell says, is to view partnerships not with “tolerance,” but rather with “elasticity.”

Coined in France in 1651, elasticity was a scientific term first used to describe certain gases. However, it derives from the Greek word elastos, which means, “ductile, flexible.”

Sounds a lot better, doesn’t it?

LESSON LEARNED: people would rather be dealt with “flexibility” than “tolerance.”

AND HERE’S THE BEST PART: elastic, or flexible relationships…

*Expand and are accommodating.
*Grow and unfold in their acceptance.
*Absorb the negatives without attention.
*Stretch so the relationship can breathe.
*Experience little bumps in the rocky road of the partnership.

Bell was right! (Thanks for the great quotes, Chip!)

Wouldn’t it be great if all your partnerships – in business AND in life – looked like that?

LET ME ASK YA THIS…
Are you “tolerating” people or “being flexible” with people?

First: consider what you’ve just learned about the meaning, the history, the implications and the attitude of the word “tolerance.”

Second: take some time in the next few weeks to monitor and evaluate how often that word enters your mind or exits your mouth.

Third: ask yourself the following question: Whom are you tolerating? Make a list. Be honest with yourself.

Fourth: make the CHOICE to change your thinking about that word.

Scott Ginsberg
That Guy with the Nametag

If so, perhaps I could help on a more personal, one-on-one basis.