If you have to tell people you are, you aren’t 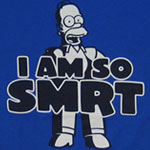 The other day I (thought) I was having an epiphany:

“If you have to tell people you are, you aren’t.”

BRILLIANT! I was all excited to write about it, blog it, and eventually take credit for that statement as my own original thought.

The Google informs me that Margaret Thatcher first uttered that quotation like, 50 years ago.

MINI-LESSON LEARNED: Every time you think you’ve said something witty, brilliant and original, google it first. Odds are, someone’s already said it before you.

Anyway, notwithstanding my apparent unoriginality, I still wanted to expound on Large Marge’s profound statement.

If you have to tell people you are, you aren’t.

ChefManifesto.com is a project to collect observations from the people on the front lines in the restaurant business. In a recent blog post, one contributor from Colorado shared the following story:

A couple came into our restaurant last night. It was standing room only and an hour waitlist. They heard that and informed the hostess that waiting for a table wasn’t going to work for them because they were “V.I.P’s” I’m sorry, but if you have to tell someone you are a VIP, you probably aren’t.

Interestingly, this statement can also work when reversed:

“If you have to tell people you AREN’T, you are.”

I once had a stalker. Every day for about two months he would leave creepy messages on my voicemail beginning with, “Look Scott, I’m not a stalker or anything, but…”

Seriously. If you have to tell someone you’re NOT a stalker; you’re a stalker!

So, here’s the deal:

If you are, people will know.

And if they don’t know yet, they WILL.

Either from their own experience or from someone (they trust) telling them.

No need to shove it down their throats.

“A city on a hill cannot be hidden.”

LET ASK YA THIS…
Why do you think people tell other people that they are?

LET ME SUGGEST THIS…
What could people say (do) instead?