I Love The Ambient Humanity Of The Workplace 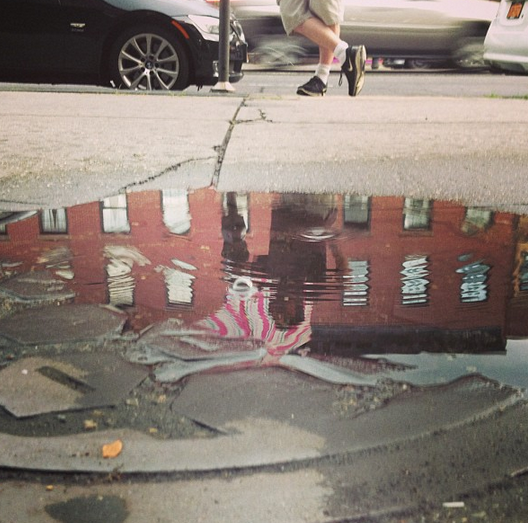 “We leave a lot of happiness on the table.” There’s something different about you. Did you lose weight? Cut your hair? Buy new clothes? Change your nametag? Nope, I’m just happy. Damn. I had no idea happiness counted for so much. Which doesn’t mean I was unhappy before. But when you prioritize achievement over contentment, when you’re burdened by the belief that you haven’t done enough to be okay with yourself, happiness has a hard time bubbling to the surface. You have to roll an awful lot of rocks up an awful lot of hills, just to get a taste of that sweet air. On the other hand, when that anxious part of you is finally resting, no longer suffocating under an avalanche of maybes, it’s amazing how freely the vomit of happiness spews out. Inspired another happy guy named Scott.

“I love the ambient humanity of the workplace.” Trying to be creative alone is like trying to play basketball without a backboard. Sure, you might drain a few buckets here and there, but it’s a lot easier to score with a surface to bounce off of. Without that human exchange, you lose perspective. Your nose gets pressed too hard against your own glass. And you don’t realize how myopic or naive or uninformed your ideas truly are. Besides, all you really need is a fresh set of opinions. Not endless rounds of feedback. Not a full on brainstorming session. Just enough humanity to keep your creativity in check. It’s kind of hard to access that when you’re sitting your living room in your pajamas. Inspired by relentless collaboration.

“Resist the temptation to view those around you as objects and use them.” What do you see when you see people? Still one of my favorite questions of all time. I think it has a massive impact on how people experience you, and how people experience themselves in relation to you. What’s interesting is how your answer changes over the years. Do you see people as props in your personal play? As opportunities for generosity experiments? As spare parts to support your fragile self? As infinite sources of interestingness? As disposable pink spoons? As sales waiting to be made? What you see when you see people affects everything. And I wish more of us considered that. Inspired by The Paris Review.

“Discussing doing is a mistake.” A few years ago, I became so frustrated with the world’s inability to execute, I wrote a book about it. Fifty thousand angry words on the topic of taking action. Pretty proud of it. And I don’t even consider myself an angry person, but the only way to light a fire under people’s assess was to channel my emotions into something more palatable. Like a book. That’s the beauty of art. You can sneak in there and make people feel just uncomfortable enough to make a change. And while I have no way of knowing how many people I reached, I did run into my friend Phil this weekend. And he’s lightyears beyond where he was five years ago. Mission accomplished.

“Committed people deserve committed people and aren’t compatible with anybody else.” Love is not an isolated incident. There’s rarely one shining moment, one unforgettable experience of romantic perfection that proves she’s the one. To base the verdict of our relational rightness on a single kiss under the starts would be shortsighted and immature. I know because I’ve done it before. Me and my stupid cinematic imagination. The reality is, love is more of a slow build. An accumulation of all the corny little things we notice about each other. Like those two extra seconds of eye contact during dinner. Or the first time we cried on each other’s shoulders. Or those ridiculous sound effects we make that somehow communicate volumes. If true love were accurately depicted in movies, most people would walk out before the second act. Not me, man. Not me.