Are You Creating Medium Agnostic? 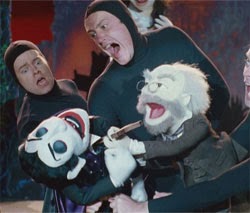 In the movieForgetting
Sarah Marshall,a heartbroken songwriter has this idea for a rock opera.
The theme of his musical is vampires and eternal love and how men smother the
women they want to be close with.

And the hook is, the writer has this vision of performing
the opera with puppets.

Throughout the movie, Peter struggles to make progress with
his project. He’s depressed and lovelorn. His creativity gets blocked. He even
feels embarrassed to share his work with anybody.

But just when he starts to lose hope on his rock opera, he
performs one of the songs for his new girlfriend. And she thinks the material
is hysterical.

Smash cut to a sold out theater for the musical’s debut
performance, Peter reflects on his creative process, “I didn’t realize that my
musical was a comedy, but when someone told me that, and it just, like, opened
the whole thing up.”

This
is a common mantra in the digital, startup and tech world. We’re seeing more
and more companies who aren’t attached to any one particular solution or
idea, rather, they’re fueled by serving the evolving needs of the users in
whatever way works best.

Scott Belsky, founder of the online portfolio
platform, Behance, is famous for his
position on creating medium agnostic. He believes companies should be
constrained by their missions, not the media they work in. And so, at his
organization, everything they do revolves around empowering careers and
organizing the creative world––but pursuing that mission through any medium
possible, whether it’s a blog, paper product, conference, or even an online
network.

During a presentation at a recent design
conference, Belsky said:

“Years
ago, a company would have to define themselves primarily by their medium,
saying they’re a tech company or a company that puts on conferences or a blog.
But in the modern day of cloud servers, open source software and seamless
connection with the masses, it’s easier than ever before to pursue your mission
using many mediums. The cost of execution has gone down drastically, making it
easier for a business to expand outside of the media they’ve established
themselves in.”

Of course, that’s the startup world.

But when it comes to the art world, working
medium agnostic is just as applicable.

Instead of locking our work into a single path, we keep
everything in permanent beta, evaluating new opportunities as they present
themselves, taking into consideration our evolving assets. Instead of limiting ourselves to
one vision of our capabilities, we live larger than our labels, cast a wider
creative net, make use of everything we are and open our work to becoming more
dimensionalized.

Because
it’s not our job to decide what to create, only listen for what wants to be
created.

Last
year, I started writing what I thought was going to be my next musical
album. But when I stepped back and freed my work from that label, I let the
project become what it wanted to become. And eventually, I said to myself, wait
a minute, this isn’t going to be record, this is going to be a documentary
film.

That’s what wanted to be created.

Another
time, I started working on what I thought was going to be my next book.
But when I got frustrated and blocked and bored of the material, I stepped back
to let the project become what it wanted to become. A few days later, I had
lunch with a friend who helped me realize, oh wow, this isn’t going to be a
book, this is going to be a college curriculum.

That’s what wanted to be created.

I’m
reminded of an interview I read with cartoonist Hugh Macleod:

“We try to reverse engineer the
universe from our own ego. Hilarity ensues. A winning approach for me is to
just do my work to the best of my ability, and think of every project as not so
much in terms of the result I want to have, but as an experiment to see if this
works.”

Hugh believes, as I have for many years, that with no labels, there are no limits.
That when we keep the results of our work open ended, we open our work to
becoming more, uncovering new territory for expansion, inviting new dimensions
to our creative life.

In
fact, the word agnostic has a
fascinating history, around which there has been significant debate and
controversy. From an etymology perspective, the word literally means, “without
knowledge.” From a historical perspective, evolutionary biologist Thomas
Henry Huxley was the first to surround the word with religious, metaphysical
and spiritual implications. And from a social and culture perspective, technical
and marketing literature use the word to describe an independence from
parameters.

The point is, all instances of the word agnostic point
to the same basic principles:

Discard
prejudices. Suspend judgment. Empty yourself of expectations. Surrender control.
Say yes to what is. Don’t fall in love with your ideas. Put an end to the habitual
anticipation of outcomes.

Listen to what wants to be created.

That’s the mindset of the prolific creator.