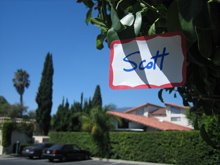 This week I had the opportunity to speak with 150 student leaders of Res Hall Life at University of California Santa Barbara.

It’s actually a cool story how I ended up there…

Several years ago, a guy named Mike bought my first book. After reading it, he was inspired to create a community-building program for his Res Hall in Delaware which included using nametags with all of his students. Apparently it worked so well that he actually won an award! (Way to go Mike!)

Long story short: my client, Michele, was his coworker. She and I kept in touch over the years and finally got our scheduling together for UCSB’s program. 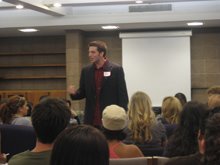 They were definitely an unforgettable group! First of all, the entire front row was filled with couches. That’s what I’m talkin’ about! I was tempted to sit down in the middle of the training!

We spent the bulk of the program talking about personal availability. And I have to apologize to everyone in the audience for TOTALLY blanking on my second “success sentence.” (Hey, I’m human…)

My three points were:

1) Listening is not waiting to talk.
2) You have two ears and one mouth, listen and talk proportionately.
3) Say to people, “I don’t know what that means” and “How do you feel about that?” to show your humanness. (This was the one I forgot. D’oh!) 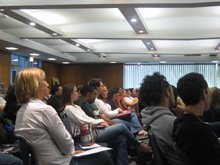 We also had awesome feedback from the students during the famous Three Word Nametag Exercise. They all agreed that the favorites of the day included: 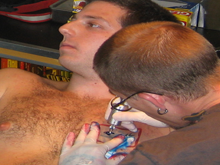 Now, since I’m still trying to get the hang of my new Mac, we had to bail on the PowerPoint; which wasn’t really a problem, although I do love seeing the audience’s reaction to this slide.

So, I had to think fast. And right before I finished up, I got the permission of the audience (and of course, the director of Res Hall Life) to reveal the tattoo in person as my closing point on consistency and commitment.

I rarely (and I DO mean rarely) ever do that, but everyone agreed: what the hell.

I started unbuttoning the top two buttons of my shirt. All 150 of the students were laughing so hard that I could barely stand, much less keep a straight face. But sure enough, as I held open my shirt and thought to myself (Man, I must be out of my f***ing mind!) I revealed The Ink and reminded them, “Consistency is far better than rare moments of greatness.”

LET ME ASK YA THIS…
What’s the most dangerous thing you’ve ever done on stage?

LET ME SUGGEST THIS…
Next time you give a speech, remember: dangerous can be good.

Are you That Guy?

Find out in Scott’s new book at www.hellomynameisscott.com

Focus on the umbrella
Ginsberg and Gitomer Team Up Again!
8 unexpected (yet unforgettable) follow-up techniques