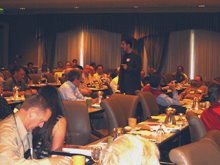 I just finished another great program with First Financial Resources in Irving, TX!

We discussed several techniques on how to become that guy, namely, accessibility. I shared my (new) favorite example from last week’s post, So this is what happens when you’re not tainted by the corporate world.

Then they took part in the traditional Nametag Job Title Exercise, from which we had some excellent participation.

Favorites of the day were “Wealth Creation Dude,” “FFR Organizing Wench,” and “Single and Wealthy.”

Additionally, I learned the difference between a Bull Market and a Bear Market, thanks to my new friends @ New York Life. (P.S. It’s a reversible puppet!) 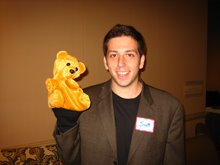 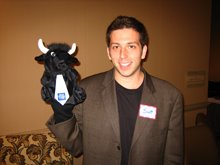 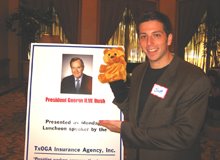 The highlight of the event, however, was the appearance made by former pres George H.W. Bush. He was scheduled to speak to an oil company during lunch. We tried to get in to watch, but there were secret service dudes EVERYWHERE. And you don’t wanna mess with those guys. Not exactly approachable!

Fortunately, I got a picture with his sign, which was almost as cool.

LET ME ASK YA THIS…
How do you make yourself accessible to the people you serve?

Wait for nothing
The New Paradox: More Choices, Less Time
Boxes are for suckers