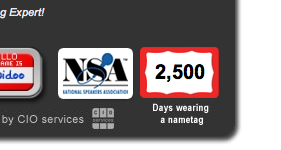 Anyway, I’ve been saving this post for just the right occasion…

Last night I asked my friend Maria, “What was the major contributor to your success?”

She told me that when she married a man from a different culture, a different religion and a different way of life, the hardest part was dealing with his in-laws.

“I emigrated from Mexico at the age of 28,” she explained. “And even though the language barrier was an obvious challenge, my in-laws were worse!”

Because they didn’t believe in her.

“So, that was exactly why I worked so hard,” Maria said. “To show to them. To prove them wrong. Because they didn’t believe in me.”

You know, it’s interesting. If someone were to ask me what the major contributor to my success was, I would say, “Because EVERYBODY believed in me.”

I guess that’s the way belief works. Whether it’s for your or against you, it’s still the most powerful motivator in the universe.

To quote John Mayer, “Belief is a beautiful armor, but makes for the heaviest sword.”

LET ME ASK YA THIS…
Who believed in you first?

LET ME SUGGEST THIS…
Call them right now and thank them.

Corny doesn’t mean ineffective
Approachable Service: As long as I’m here
Are you an octopus or an earthworm?