13 reasons to be That Guy 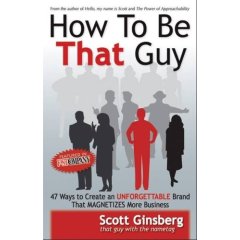 Somebody who reminds everybody of nobody else.

Call it personal branding. Call it USP. Uniqueness. Remarkability. Whatever.

The best.
THEE, not a.
The only one.
The obvious expert.

The go-to person when it comes to your area of expertise.

And if you’re NOT That Guy, customers will gladly and easily choose someone else who is.

But that shouldn’t be your only motivation. Here’s a list of 13 more reasons to become That Guy:

1. Clients need to know they’re getting YOU. Because they don’t trust corporations, they trust PEOPLE. Tangibility, not magnitude.

2. We live in a hyperspeed, A.D.D. culture. According to Wikipedia, the average human attention span is six seconds. Which means people need shortcuts. And that’s exactly what personal brands are: shortcuts.

4. Customers are impatient. And they want the best. The ONE. The Guy. The Man. And people who are perceived as the best get rewards that DWARF the people who are second, third, fourth and fifth. (Thanks for that one, Seth Godin.)

5. Customers have near-infinite choices. Which means they’re only going to do business with you if they’ve heard you, heard OF you, or someone they TRUST has heard of you.

6. We live in a culture of sales resistance. Consumers are skeptical and require confidence before deciding to buy. They’ve been advertised to, marketed to, duped, fooled, conned, scammed, sold and screwed over too many times.
7. “Loyalty” is a joke. Because big companies don’t realize that people aren’t loyal to big companies! They’re loyal to people.

9. Trust is at an all time low. (Thanks to, faceless, scandalous corporate and government monoliths.) But That Guy is approachable. That Guy is familiar. And prospects rely on familiarity. Which is good, because familiarity leads to predictability. Predictability leads to trust. And TRUST is foundation of all business.

10. Transparency is a must. Customers have more acute BS meters than ever before. Only the authentic survive.

11. The world is crying for uniqueness. Just turn on your TV. Open a newspaper. People LOVE That Guy, That Girl, Those Guys, That Company, That Firm, That City, That Hotel, That Bar, That Place, That Band, That Airline, That … you get the point.

13. Nobody notices normal. Fifty years ago? Maybe. But this is 2007, man. The market is cluttered, it is crowded and it is L-O-U-D! Positioning yourself as “normal” is like asking customers to find a need in a stack of needles! NOTE: that doesn’t mean there’s anything wrong with being normal. If you want to be normal, that’s totally cool. Just remember: those who get noticed get remembered; and those who get remembered get business.

LET ME ASK YA THIS…
What makes you That Guy?

LET ME SUGGEST THIS…
Tell us why!

Do you know who’s talking about you?
Approachable Service: Stop, Drop and Roll
The single greatest thing you could ever do for your writing career