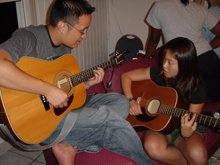 I’ve been playing guitar since I was 12.

“You only need to know three chords: G, C and D,” my dad said. “The rest you’ll figure out on your own.”

And that made me a better musician than I EVER could have become by paying some guy $60 an hour to teach me scales.

INTERESTINGLY: over the years I’ve also come to learn that lots of stuff (ok, most stuff) is 90% self-taught:

Which doesn’t mean that self-teaching is a replacement for lessons.
I’m sure all of us could use some help on those first three chords.

Which doesn’t mean mentors, advisers and teachers aren’t necessary.
I’m sure all of us could learn from the experiences of others.

But ultimately, I still believe: you don’t need lessons.

The best way to get good at something is to just start DOING that something.

LET ME ASK YA THIS…
How did you learn to do what you do?

LET ME SUGGEST THIS…
Share your best anti-lesson tip here!

35 ways to leverage your next media appearance
Do people hear FROM you or ABOUT you?
Three words of advice