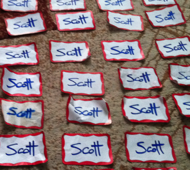 I just wanted to see what would happen.

The nametag was an exercise in curiosity, nothing more.

But that’s just me. I’ve always been incurably curious. I’m a giant question mark. I’m the annoying kid who raises his hand right before the lunch bell rings – because he just has to know the answer – then makes everybody late for Tater Tot Tuesday.

The point is, history proves time and time again that the most successful, most celebrated and most influential people in the world were the ones who asked dangerous questions. Despite overwhelming efforts to silence their enthusiasm and deflect their interest, they kept curiosity burning. We can’t forget this. We can’t slide into complacency.

Otherwise we descend into fundamentalism.

Curiosity is not a threat.

It might have killed the cat, but it also created my career. I’m a dog person anyway.

What we can’t see, what we are afraid to see and what we are unwilling to see, that is what threatens us more.

LET ME ASK YA THIS…
What are you questioning?

LET ME SUGGEST THIS…
For the list called, “52 Secrets of Highly Successful Writers,” send an email to me, and you win the list for free!

NametagTV: Currency That Matters
Take a Moment, Make a Memory
Where Do You Belong?