Is your nametag too crowded? 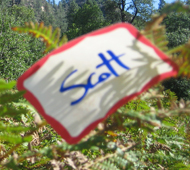 “Hey Scott, why do you choose to wear the simple, hand-written, first-name-only nametags? Why not get something more customized and permanent?”

Well, I guess it HAS been a while since I riffed on nametags.

Over the years I’ve been asked this question SO many times that I have several answers:

1. It’s pure, human and friendly. And most importantly, it’s simple. Not to mention, you’re immediately on a first name basis … with everyone!

2. It’s enough. Sigmund Freud proved that a person’s name is the single context of human memory most forgotten. So, putting your first AND last name on the nametag is almost like asking someone to remember too much.

3. It eliminates preoccupations, conclusions and stereotypes. If your nametag indicates your last name, company name or job title, people are going to prejudge you based on this information. This may result in them NOT approaching you, i.e., if they were recently screwed over by someone from the same company or have had poor experiences with people who work in your field.

4. It’s self-disclosing. Writing ONLY your first name encourages an exchange of (minimal) person information and builds an instant connection. For example, in all the years of wearing my nametag, thousands of complete strangers have just come to me and instantly introduced themselves. Without asking. They just did it because of the norm of reciprocity inherent in interpersonal communication. Wow!

5. It limits the PSD’s, or Potential Silent Dialogues. If you see someone’s nametag that says nothing but “Jack,” the only assumption you can make is, “That guy’s name is Jack,” as opposed to, “He looks like a salesman, don’t go near him.” Associations and churches are notorious for screwing this up by indicating board positions, years of membership, etc. Dude, who cares? Why can’t we just connect as people, not as designations?

6. It puts the person first. Believe it or not, not everyone is defined by his job. And not everyone feels the need to ask, “So, what do YOU do?” ten seconds after meeting someone new. So, that’s the beauty of a plain, vague nametag: it leads with your person. Humanity before statistics. Values before vocation. Personality before position. WHO YOU ARE … before what you do and where you work.

7. It removes yourself as a threat. Nametags instantly and constantly reveal your personal information to everyone around you. This foregoes your anonymity. Which creates instant accountability for your actions. Which proves you’re comfortable in your own skin. Which immediately makes you less threatening to others. THINK ABOUT IT: would you mug somebody if you were wearing a nametag?

8. It detaches from outcomes. The simplicity of your nametag shows that you’re not goal oriented. You’re not selling, marketing or networking. You’re not attending a conference. You’re not trying to convert people. All you’re doing is giving yourself away. Sticking yourself out there. Making other people feel comfortable. That’s it.

FINAL POINT: I’ve been wearing a nametag 24-7 for the past 2,521 days. And if there’s one thing I’ve learned, it’s that people crave simplicity.

LET ME ASK YA THIS…
Is your nametag too crowded?

LET ME SUGGEST THIS…
Next time you are required to wear a nametag, make it as simple, basic, pure and minimal as possible.

How to convince yourself that you actually hav a real job, pt. 2
How far do your thoughts travel?
Hear The Nametag Guy on the Marketing Monday Podcast!