What Every Leader Needs to Know About Infecting Their Followers 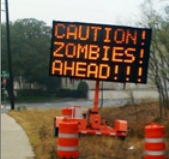 Not with a fatal disease, of course.

We’ll leave that to the zombies.

Instead, let’s talk about your role as a leader.

The word “infect” comes from the Latin infectus, which means, “to put in.”

It might not matter. With the exception of most diseases, what you infect people isn’t as important as how you infect them.

Try this:1. Be a mirror. Sometimes the best way to infect people is to staple your tongue to the roof of your mouth and let them infect themselves.

In my leadership council, we regularly employ the practice of “becoming a verbal mirror” for the presenter. By reflecting their reality back to them – using their exact words, not by summarizing – we allow them to see themselves as we see them.

Often, that’s all they needed to become infected: 50 ccs of self-awareness. What do you reflect back to people?

2. Help people become impressed with themselves. Lead them towards the answers they need to find. You might try using leading, one-word questions like, “But…?” “And…?” or “Because…?”

This puts the conversational ball in their corner, equipping them uncover their own solutions. It also shows people you trust them enough to find their own answers. Finally one-word questions reinforce their sense of self-reliance.

All of which infect them with a steady stream of self-belief. Have you mastered the economy of words?

3. Inspire others of a vision of what they can contribute. The night before delivering a career-changing keynote, I handed my friend Dixie Gillaspie a note. I told her not to read it until she went to bed.

It read: “You own tomorrow. I believe in you.”

Twenty-four hours later, she did. Big time. And all it took was seven words. I wonder who you could deliver a simple, handwritten note to in the next week that would become infected. How will you help people taste the sweet liberation of what’s possible?

4. Infect through being. In my thirty years of experience as a human being, there are four channels of infection: Thoughts, Words, Actions and Being. All are effective, but you’ll find the fourth to be the most beautiful, most sustainable and the most efficacious.

As Ram Dass wrote in All There Is, “The only thing you have to offer to another person, ever, is your state of being. The degree of consciousness with which you’re protesting determines how well they can hear what it is you’re really saying.”

My suggestion is: Next time you’re having a conversation with a friend, employee, volunteer or complete stranger – thrust your whole self into that encounter.

When you passionately and respectfully present people with a compelling vision of the future – and, the choice to be both participant and creator of it – you indirectly make them want to ride along with you. Is your personhood infectious?

5. Go out of your way to gush. I’m also board member of a small organization comprised of professional speakers, consultants and other thought leaders under the age of forty.

Once a quarter, we meet in a convenient location for an energizing day of brainstorming, masterminding and bullshit-free discussion. Now, although we’ve only been active for a few years, I’ll never forget what happened immediately after our inaugural meeting.

I went straight back to my hotel room at midnight and emailed three of my good friends who were unable to attend the session. “Holy crap guys,” I said, “my brain, heart and spirit are simultaneously overflowing. We have to have lunch within the next week so I can gush about today’s meeting.”

We got together a week later and I spent the better part of an hour infecting them with my energy and passion. Not to sell them on the group. Not to convince them to come to the next meeting.

And not to create a convenient deficit position that could only be filled by the thing I was selling. Just to gush. Just to let the infection cascade out of my pores like an Amazon waterfall.

To the delight of the group, all three of my friends committed to attending the next meeting. Which they did. And which they loved it just as much as me. Who could you set up an agenda-free gush session with next week?

6. Mood matters. According to a twenty-year study published in a 2008 issue of Time, emotions can pass among a network of people up to three degrees of separation away.

“Your joy may, to a larger extent than you realize, be determined by how cheerful your friends’ friends’ friends are, even if some of the people in this chain are total strangers to you.”

Remember: As a leader, people are looking to your face to see where the organization is going. If you asked the five people who spent the most time with you, what one word would they use to describe your mood?

7. Punch a few stamps on their sandwich card. During high school, several of my friends worked at a local sandwich shop. As you might expect from teenagers, they tended to get a little “stamp happy” on my sub club card.

Yes, this habit was unethical, dishonest and probably cost the store thousands of dollars in free sandwiches over the years. But you have to understand: The sandwiches were really, really good.

Not that that makes it ok. But the image of the sandwich card is a helpful reminder of how to liberate the inner motivation of others. According to Dan & Chip Heath’s bestseller, Switch:

“One way to motivate action is to make people feel as though they’re already closer to the finish line than they might have thought.”

As a leader, your mission is to figure out how to throw people that lifeline. For example, whenever new students come to practice at my Bikram Yoga studio, I always make it a point to congratulate them in the locker room for sticking it out the whole ninety minutes.

“Hey, at the minimum,” I’ll tell them, “at least you stayed in the room the whole time. Not all first timers do. Consider that a victory!”

Every time I’ve said this, new students never fail to become energized. What could you say to someone to reinforce her self-belief that she’s progressed (significantly) more than most people her exact same situation?

8. Instinctively respond favorably. That way, no matter what people say, you lay a foundation of affirmation. This increases their level of receptivity, which increases their infectability.

Even if you don’t know what, specifically, to say to someone, you can always respond with the word, “Wow.” It’s a neutral, versatile, empathetic, non-judgmental and emotionally unreactive term.

It buys you some time, until you can define your official response. It also helps you maintain composure when presented with unexpected, difficult or crucial information.

Ultimately, it creates objective space in the conversation, which grants the speaker permission to continue. How positive are your default responses to people?

9. Take people to the depths they desperately need to explore. Even if that means going to a completely unexpected place. Meet people where they are. Sit there with them for as long as they need.

Then, challenge them to go somewhere even better. Ideally, they’ll walk away from you as an upgraded version of themselves. All because you steered the rudder as they paddled like hell. Are you an interpersonal archaeologist?

REMEMBER: Infection has nothing to do with being sick.

It’s about transferring emotion.
It’s about putting something into people.
It’s about influencing them your state of being.

Spend your days doing that, and you won’t even need the zombies.

LET ME ASK YA THIS…
Whom are you infecting?

LET ME SUGGEST THIS…
For the list called, “37 Personal Leadership Questions Guaranteed to Shake Your Soul,” send an email to me, and you win the list for free!

8 Ways to Scare Yourself for the Right Reasons
5 Ways to Make a Mark That Matters
Watch Scott Ginsberg’s Speech to The Million Dollar Roundtable: Seoul, South Korea