That Guy meets That Bloke 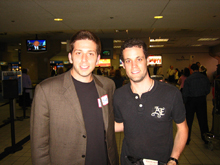 And look, he’s with That Bloke!

Meet my friend Pete Williams. Referred to in the media as “Budding Richard Branson”, 24 year-old Pete Williams has been an entrepreneur from an extremely young age.

During 2003 while reading the book The One Minute Millionaire, Pete Williams got a business idea…

The MCG (The Aussie version of Madison Square Garden) under its own redevelopment and as Australia’s number 1 sporting ground, PeteWilliams took action to recreate the certificates using the timber that was once the seating at the ‘G.

On the back of a few phone calls and self-confidence he was able to track down the wrecking company which was demolishing the Ponsford stand (at this stage the Members Pavilion had not been touched), who informed him they had a significant amount of timber from the seating and flooring as hoped, however to his amazement they also had a considerable amount of the world famous MCC Crested Carpet – which originally lay in the members dining room. After viewing the carpet lying in the corner of the wreckers’ warehouse the following morning he took the entire sum along with a mass of timber at a very ‘pleasing’ price.

From that point on he developed and created a series of limited edition sports memorabilia pieces which sold from $395 – $1495. These included a photo of the G, a piece of the famous carpet and even a limited number series that had their frame created out of the timber which was once the stadium. Amongst a wide range of creative and unique marketing techniques and strategies employed, a press release created with the headline ‘21 Year Old Sells MCG For Under $500’ generated over $50,000 of FREE advertising and publicity in media via Channel 7 news, Herald Sun articles, AM and FM Radio interviews and trade magazine articles – which generated a huge proportion of sales at no cost.

His new book comes out this month, How to Turn Your Million Dollar Idea into a Reality. I’ve already read some of it, and it’s awesome.

Also, Pete and I happened to be in Dallas on the same day, so we shared a cab to the airport. Then we got lost for about an hour at DFW. It was a lot of fun. I guess we were so excited aboue meeting that we blanked out on our sense of direction.

Oh, wait, I forgot: I have no sense of direction.

Anyway, thought you guys would like to meet Pete. He’s a cool dude.

LET ME ASK YA THIS…
Aren’t Aussies the coolest?

A quick story about the greatest day of my life
6 Googleicious Ways to Approach Your Next Sales Call
The World is a Mirror, Part 13