Talk with your pads 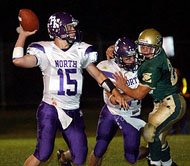 My football coach at Parkway North (Go Vikes!) had a great motto for sportsmanship:

“Talk with your pads.”

His vision for our team was one of character and maturity, not just strength and ability.

And that’s why he wouldn’t stand for ANY player who talked trash to the other team.

“You guys are bigger than that,” Coach Parks would say. “You don’t need to stoop down to their level. If you hear a player on the other team running his mouth at you, don’t say a word. When a real man needs to let out his emotions and prove his worth, he talks with his pads.”

So we did. We talked with our pads.

And that’s exactly why were we undefeated.

Well, that AND we had this running back named Mel Dog that was really, really fast.

But the lesson within Coach Parks’ motto, “Talk with your pads,” goes way beyond sportsmanship.

You can apply it to business, too.

EXAMPLE: Some professional feel the need to talk a big game so they can elevate themselves above their colleagues and competitors.

The key word being, “talk”

Which is exactly what they spend most of their time doing: talking.

Not working.
Not taking action.
Not accomplishing anything.

The problem is, when you “just talk,” (without supportive action and ability) it’s really hard for people to hear you over the sound of your own inflated ego.

On the other hand, talking with your pads is a LOT louder.

AND THE BEST PART IS: When you talk with your pads, people actually perk up and listen.

So, consider these suggestions:

Talk with your pages.
Don’t brag to your fellow authors about how many books you’ve got in the pipeline. Just do your work. Just write, every single day, even if you’re not in the mood.
And when people see your long list of titles on Amazon, you won’t have to say another word.

Talk with your visibility.
Don’t brag to your fellow entrepreneurs about how great your business is doing. Just do your work. Just be visible in the media, in the community and on the web. And when people see how many (other) people are talking about you, you won’t have to say another word.

Talk with your order sheets.
Don’t brag to your fellow salespeople about how many prospects you’re working on. Just do your work. Just deliver value and enable people to buy. And when they see your stack of order sheets, you won’t have to say anything another word.

They just do their work. They talk with their pads.

LET ME ASK YA THIS…
Are you talking or doing?

LET ME SUGGEST THIS…
For a copy of my 153 Quotations to Inspire Your Success, send an email to scott@hellomynameisscott.com and I’ll send you the list for free!