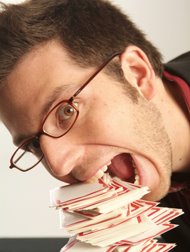 People are often stunned when I tell them I’ve actually forgotten to put on a nametag before.

But it happens. Every once in a while I’ll walk out my front door, or get into the car or be halfway to Starbucks when I look down at my shirt and say, “Ah crap, I forgot my nametag.”

Of course, keep in mind I always store ten spare pre-written nametags in my wallet just in case.

But, sure. I forget to put on a nametag sometimes. Big deal.

Now, on a larger scale, people are ALSO surprised when I give them my answer to the question, “Scott, have you ever thought about QUITTING the whole nametag thing?’

Because obviously, they assume my answer is an immediate, “No!”

When in fact, it’s just the opposite.

And you know what?

I don’t mind admitting that to you. I’m not ashamed that I’ve doubted my own commitment.

Because I think there comes a point at which commitment can actually become a detriment.

AFTER ALL: What good is being committed if your commitment…

Becomes a threat to your health?
Causes you to lose sight of your family?
Harms the world or the people around you?

Or, more dangerously: What good is being committed if your commitment causes you to dishonor your Truth?

See, commitment can be seductive.

Because sometimes, the deeper you commit to something, the more likely you are to become SO wrapped up and so obsessed with idea of BEING (and APPEARING) committed … that your desire actually becomes bigger than that which you are committed to.

And that’s when you lose sight of what’s truly important.

Even Mahatma Gandhi (of all people!) questioned his own commitment. Even HE occasionally had a change of heart.

In one particular instance during a protest against the British in 1930, Gandhi suddenly decided to forfeit his public demonstration. And this was several days into it!

So, when confronted by his lieutenants for an explanation, Gandhi said:

“Only God knows Absolute Truth; I just know relative truth. And my understanding of truth changes from day to day, so, I’m sorry, but I need to stop this particular protest. My commitment must be to Truth, not to consistency.”

Have you ever made a decision – just to appear consistent – while dishonoring your truth?

NOTE: This isn’t a case against commitment. Or consistency.

However, after 2,835 days, my experience leads me to believe there DOES come a point of diminishing returns.

So, here’s my advice:

1. Don’t allow psychological and social pressure to prevent you from making mistakes.

2. Don’t ignore that still, small voice in your intuitive heart.

3. Constantly remind people of your commitment … BUT … let go of the need to do so for sole the purpose of strengthening your own position.

Look, when you notice a cognitive dissonance in your life, accept it – don’t fight it.

BUT REMEMBER: Do not dishonor your Truth for the fear of appearing inconsistent.

Which reminds me, I TOTALLY forgot to put on a nametag this morning.

So if you’ll excuse me, I need to go grab my Sharpie.

LET ME ASK YA THIS…
When was the last time you questioned your own commitment?

LET ME SUGGEST THIS…
For the list called, “26 Ways to Practice Being Yourself,” send an email to me, and I’ll send you the list for free!

Join The Nametag Forums! Share stories, best practices and connect with a like-minded community of business professionals who stick themselves out there!

LET ME ASK YA THIS…
What are you unquestionably committed to?

LET ME SUGGEST THIS…
Share an example of how you visually demonstrate that to people here!