1. A successful speech is a group effort.
2. Activity isn’t progress.
3. Ask yourself how YOU can do it before asking how it’s already been done.
4. Be confident but uncertain.
5. Be gentle and non-critical of yourself.
6. Build credibility into everything you do.
7. Discard evaluative tendencies.
8. Don’t advertise your importance.
9. Don’t be stopped by not knowing HOW.
10. Don’t count on your audience to connect the dots.
11. Don’t fall in love with your own ideas.
12. Don’t reach for ready-made replies.
13. Don’t talk so goddamn much.
14. Don’t talk the energy out of your idea or else there will be nothing left for action.
15. Don’t waste your time playing to the wrong crowd.
16. Doubt is healthy.
17. Emulate, don’t imitate.
18. Every day is the answer.
19. Everything you do should lead to something else you do.
20. Everything you write MUST have a response mechanism.
21. Fear the known.
22. Find a way to catalyze your discontent.
23. Find out if this is an opportunity, or an opportunity to be used.
24. Formulas are reductive. Stick with practices.
25. Get the other person to learn it on their own.
26. Get the other person to say it on their own.
27. Get their email.
28. Give people new eyes, not new landscapes.
29. Good art is never finished.
30. Ideas are your major source of income.
31. If all you’re doing is speaking, you don’t have a business.
32. If all you’re doing is speaking, you have no audience outside of your audience.
33. If they want you, they’ll find you.
34. If you make it an issue, you give other people permission to make it an issue.
35. Know the patterns of your ignorance.
36. Notice your patterns of energy investment.
37. Patience. It’s only a matter of time. They’ll come when they’re ready for you.
38. Pinpoint your value and work backwards.
39. Publicists are full of BS.
40. Punch people in the face. Make it really, really clear.
41. Recognize threats to your ownership.
42. Refuse to define yourself by others’ assessments.
43. See more by striving less.
44. Seeking destroys the journey.
45. Seven words: “I respect your opinion of my work.”
46. Shut up and listen.
47. Something isn’t always better than nothing.
48. State your fee confidently and shut up. He who talks next loses.
49. Stop trying to win over complete strangers who don’t know how to value you yet.
50. The loudest person in the room is usually the weakest person in the room.
51. The map is not the territory.
52. The media doesn’t care about you.
53. The more time you’ve been given to talk, the less you should actually speak.
54. The number of eyeballs isn’t as important as WHOSE eyeballs.
55. The purpose is found in the process
56. The question isn’t IF they should use you, it’s HOW they should use you.
57. Wait for the right time to prove people wrong.
58. Wearing glasses makes you look smarter.
59. When you do an interview, you’re NOT there to answer their questions.
60. Writing is the answer to everything.
61. You don’t always have to organize everything.
62. You don’t need to apologize when you’ve done nothing wrong.
63. You don’t need to be the expert. Only the PERCEIVED expert.
64. You don’t need to justify your existence to anyone.
65. Your calendar is your inventory.

LET ME ASK YA THIS…
What things do you wish someone would’ve told you when you started YOUR company? 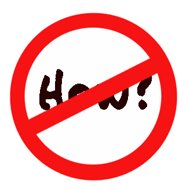 An entrepreneur (by definition) is someone who takes risks.

So, she can’t let a little thing like “knowing how” stand in her way.

“How” is dangerous.
“How” is a dream destroyer.
“How” is the difference between talkers and doers.

And too many ideas, projects and movements have fallen off the face of the Earth because somebody was stopped by not knowing how.

LESSON LEARNED: Focus (first) on the WHAT, and the HOW will eventually appear.

Be clear about the results and flexible about the process. Here’s why:

The “WHAT” can be defined right away.
But the “HOW” takes time, patience and persistence.

The “WHAT” can lead to immediate action.
But the “HOW” may take weeks, even months to get started.

The “WHAT” can lay groundwork for the “HOW” to materialize.
But the “HOW” won’t come to fruition without first identifying the “WHAT.”

So, if you have a great new idea and (still) aren’t sure how to execute it, relax.

Because all that matters (at least, right now) is that you just get started.

That you take the first step. That you do something. ANYTHING!

After all, ideas are free; only execution is priceless.

So, consider these practices to help you focus on the “WHAT.” That way the “HOW” will eventually come to fruition.

1. START with lists. The moment you get a new idea, the first thing you need to do is make it into a list. Listing is the simplest, quickest and most efficient way to capture your idea before it flies away to “But You Never Wrote Me Down Land.”

And, the human brain is a self-organizing machine. So, listing subconsciously creates patterns, groups and “piles” of material that seem to come together on their own. This will help you explore the “WHAT” to its fullest extent. I suggest spending a few hours taking a mental dump, creating lists like:

List until you’ve got nothing left to list. Empty your mind! Update, edit and revisit your lists regularly. Ultimately, this practice will objectify AND clarify your thoughts, thus bringing you closer to discovering the “HOW.”

2. CONTINUE with resources. Odds are, there’s somebody out there who’s done something similar to your idea. Your goal is to connect WITH, and glean lessons FROM that person.

So, here’s your approach:

o FIRST, spend some time googling around. See what else and who else is out there. Keep a record of your findings.

o SECOND, create (yet another) list. Find 5-7 other entrepreneurs whose ideas mirror your own. Think of them as potential resources.

o THIRD, send each of them a short email. Introduce yourself and congratulate them on their success. Then, briefly explain why you’ve reached out. Summarize your new idea in one or two sentences. Ask if they’d be willing to have coffee or chat on the phone for 15 minutes. Respect their boundaries by working with their schedule and/or offering to compensate them for their time.

o FOURTH, shut up and listen. During your conversation, ask penetrating questions like:

o What’s been the biggest lesson you’ve learned?
o What’s the stupidest thing I could do with this idea?
o What three things have most contributed to your success?
o What was the turning point in your execution of this idea?
o What mistakes do people in situations like this usually make?

o FIFTH, take copious notes. Find out what they’ve learned and where they’ve screwed up. Keep all of your research, resources and notes together in an easily accessible folder, along with your lists from the first exercise.

o SIXTH, follow up. Send your new friend(s) a follow up email to thank them for their time. Make it your goal to meet with one of these resources once a month. Without being too annoying, occasionally keep them updated on your progress. And continue to run your “WHAT” ideas by them as you discover more of your “HOW.”

3. PERSIST with education. OK! You’ve made some lists and picked some brains. Great progress on the “WHAT.” By now, the “HOW” should be starting to show its ugly little mug.

Which means it’s time to get shanks out.

A.K.A., you need to be willing to suck in the beginning.

Please take a moment and re-read that last sentence.

Yes, It comes with the territory. Whether you’re a storeowner, children’s author or a professional service provider, you’ve got to get the shanks out.

And you do so through education.

That means … daring to do it badly.
Which might mean making an idiot of yourself.

FOR EXAMPLE: Even Jerry Seinfeld and Chris Rock bombed in front of audiences in the beginning.

That means … spending time paying your dues.
Which might mean fighting your attitude of instant gratification.

FOR EXAMPLE: Accept the fact that you might not get any web traffic for six months.

That means … seeking progress, not perfection.
Which might mean asking for feedback to find out where you suck.

FOR EXAMPLE: Ask customers to offer honest feedback, even if it hurts.

That means … creating work that isn’t very good.
Which might mean throwing a lot of stuff away.

FOR EXAMPLE: Wouldn’t you want to go to the driving range to hit a bucket of balls before playing your first round of the season?

As you can see, persisting with education is the hardest, longest and most enduring part of discovering your “HOW.”

It takes the most patience.
It takes hard AND smart AND long work.
It takes stepping out of your comfort zone.

But that’s exactly why it works.

In fact, that’s why ALL of these practices work.

And I only know this because I’ve done them (and continue to do them) as I trudge forward through my own entrepreneurial hurdles.

So, if you’re an entrepreneur who’s become stuck by not knowing how, remember these three practices:

START with lists.
CONTINUE with resources.
PERSIST with education.

And just concentrate on the WHAT.

No-how will eventually lead to know-how 😉

LET ME ASK YA THIS…
When you aren’t sure about the “HOW,” what’s your first move?

LET ME SUGGEST THIS…
Share your first move here!

Not sure how to approach your new idea?