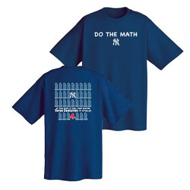 I was walking down the Las Vegas Strip one day when I saw the coolest t-shirt of all time.

A teenager was wearing it. The front was emblazoned with the New York Yankees logo.

Right above it in big, bold letters, it said: DO THE MATH.

It took me a second, but eventually I figured it out.

See, you can talk all you want about how much you hate the Yankees.

BUT THE BOTTOM LINE IS: if you really sit down and do the math, you’d realize that the Yankees are clearly one of the greatest organizations in sports history.

Which makes them unarguable.

And this doesn’t just apply to sports, either.

In business, your goal is to become unarguable.

FIRST … you disarm customers of their preoccupations.
This leaves them nowhere to go except in your direction.

SECOND … you prove to customers that you have a track record of success.
This reinforces their confidence in working with or buying from you.

THREE … you remind yourself that haters, naysayers and other forms of resistance can say all they want, but nothing can take away the fact that YOU are successful.
This just makes you feel good!

Interestingly, the word “argue” comes from the Latin arguere, which means, “to make clear or demonstrate.”

So, that’s what’s so powerful about being UN-arguable.

The value is self-evident. No explanation needed.

The New York Yankees originated in 1904.

But they didn’t win their first World Series title until 1923.

For The Yankees, it was two decades of paying dues.

See, being http://www.blogger.com/img/gl.link.gifunarguable isn’t something you just “decide” to become one afternoon.

Anyone or any company that wants to be referred to as unarguable must do a few things:

PAY their dues
That means sucking for a while in the beginning.
That means taking the time (and paying the price) to uncover your unique voice.

OBSESS about it
That means projecting unquestionable commitment.
That means eliminating the words “finish line” from your vocabulary.

STICK it out.
That means choosing to do the brave thing by staying in the longer line.
That means having the patience to compound thousands of little activities.
That means becoming the best at what you do by not quitting while everyone else falls by the wayside.

Pay, endure, obsess and stick. That’s how you become unarguable.

Being unarguable isn’t for everyone.

Only the dedicated, committed, and (oftentimes) crazy individuals need apply.

If it IS for you, and if you ARE willing to pay the price, here’s what you can expect:

…but in the end, when they do the math, they’ll either:

1. Smile and embrace you, or
2. Curl up and realize they can’t do anything to you.

Because, like ‘em or not, you gotta respect the Yankees.

LET ME ASK YA THIS…
Are you unarguable?

LET ME SUGGEST THIS…
Share your best example of someone (or something) that’s unarguable!