Think of the most horrible sound imaginable.

Maybe it’s fingers on a chalkboard.

Maybe it’s someone choking on a piece of broccoli.

Maybe it’s turning over the ignition on your car when it’s already started.

Exactly. That’s the effect noise has on people.

Now think of the most beautiful music imaginable.

Ahhhhhhhh. Puts your soul at ease, doesn’t it?

Of course. That’s the effect music has on people.

The majority of the marketing out there isn’t music.

And customers are tired of it.

PERFECT EXAMPLE: When you were watching Tivo last night, you just skipped right through those annoying commercials, didn’t you? 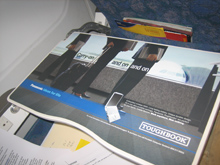 ANOTHER EXAMPLE: I took a flight on US Airways from Phoenix to St. Louis a few weeks back. When my delicious, hearty meal was delivered to my seat (by which I mean a cookie), I opened the tray table only to find the entire surface was covered with a colorful advertisement!

On my tray table!

I don’t even remember what product it was for. I think a home stereo or something. I didn’t care. I just wanted to get that ad out of my face.

Because it was just more noise.

FINAL EXAMPLE: I went downtown to the auto show last weekend. Lots of noise: banner ads, booths, tables, demonstrations, emcees giving short speeches about the features of the cars, all that stuff. Sensory overload. To the point of exhausting.

But then I saw something cool. Something musical.

A woman who worked for Chevy stood by a bright red ’07 Corvette. She had a digital camera on a tripod. And sitting in the driver’s seat was an eight-year old boy wearing a smile so big you could see it from the suburbs.

The boy leaped out of the Corvette and ran over to the girl.

“Thanks buddy! Now when you get home, go to chevy.com, login using the key code on your card, and you’ll be able to download this picture!”

“Cool! Thanks Corvette lady!” he said.

LET ME ASK YA THIS…
Does your marketing create MUSIC or NOISE?

LET ME SUGGEST THIS…
Post your best three example of marketing with music, not noise.

SSTOP! How to Approach Complaining Customers
If using pictures is wrong, I don’t wanna be right
Sir, why are you taking a picture of the elevator?