Is that gorilla wearing a nametag? 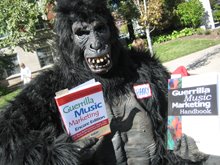 At the recent Big Read festival in St. Louis, Harry the Nametagged Gorilla made a special appearance. He hung out at the SLPA booth, encouraging passerbys to join in the fun.

At one point, a group of kids saw Harry, but were apprehensive to approach. Fortunately, throwing out dozens of packs of free Starburst made it easier. Check out the video… 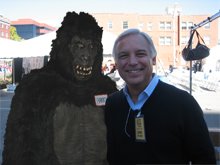 Harry also received word that Jack Canfield was making an appearance to promote his new book.

As a long time reader of Chicken Soup for the Ape’s Soul, Harry waited in line to meet the best selling author in person. Jack was happy to snap a picture with his furriest fan, who traveled all the way from The Congo just to see him.

All in all, The Big Read was a BIG success!

LET ME ASK YA THIS…
Would you approach a gorilla wearing a nametag?

This one’s for you, Kane Hodder
The World is a Mirror, Part 11
Free Ebook: 234 things I’ve learned about…