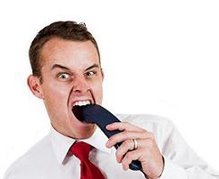 Radio ads. Billboards. Wall Posters. Yellow pages. Pamphlets. Leaflets. Brochures. TV commercials. Newspapers ads. Magazine ads. Pop ups. Fax Outs. Hiring a fat guy to stand out on the street corner during traffic with a big sandwich board three blocks down the street from your restaurant. Pitching the media to do stories about you. Standing at a big flashy booth at a trade show giving away free pens. Blinking web ads. Direct Email. Cold calls (pictured). Direct Mail. Driving down the street, slowing down in front of pedestrians, rolling down your window and asking them, “Hey, you wanna buy a home stereo?”

That last example actually happened to me last week while walking down the street in downtown Chicago. It was ridiculous!

And it got me thinking: what do all of those marketing techniques have in common?

Not all the time, but for the most part:

And they don’t work any more.

Because people are tired of being interrupted and being YELLED AT to buy stuff.

Bestselling author Seth Godin first noticed this trend in 1998. His revolutionary interview in FastCompany magazine quoted him as saying, “There’s too much going on in our lives for us to enjoy being interrupted anymore. So, our natural response is to ignore the interruptions.”

This word has been on my mind a lot lately, and here’s why…

See, tomorrow is November 1st. Which means my company will celebrate its four-year anniversary in a few months. (Woo hoo!)

Now, I will tell you that, for the few years of my company’s existence, I didn’t make much money.

However, 2006 was a stellar year. I almost tripled my projected revenue. I surpassed most of my year-end goals by October. I even managed to take some time off! (Double woo hoo!)

And so to me, I take this as a sign that my marketing efforts are (finally!) paying off.

But, I have a confession to make. In fact, I have three of them.

In the history of my career as an entrepreneur:

I know. Doesn’t seem normal, does it?

Well, that’s just the way I do business.

Because any day of the week, I’d rather: concentrate my marketing efforts on creating a sense of attraction, a sense of gravity; that magnetizes customers, prospects and fans toward my company through a process of delivering value in the vehicle known as my brand…

…than run some crappy ad. Or interrupt someone’s day with an annoying cold call. Or send out a direct mail piece. Or…

You get the point: interruption.

Therefore, if interruption is the enemy of successful marketing, what’s the ally?

Look. I’ve been wearing a nametag 24-7 for just over 6 years now. And if there’s one thing I’ve learned from tens of thousands of encounters – with new people I otherwise never would have met – it’s this: interruption sucks, interaction rocks.

Now, what exactly do I mean by interaction? I’m talking about direct contact with your customers and prospects. Building community. Making friends. Creating and keeping fans. Hanging out. Delivering value. Developing relationships.

So. Big question of the day: what do all of those marketing channels have in common?

Not all the time, but for the most part:

Because customers are excited about interacting and participating with cool stuff, people and ideas that make them feel comfortable and respected.

So, I said it once and I’ll say it again: interruption sucks, interaction rocks.

(This post was inspired by Andy Sernovitz’s kick-ass new book.)

LET ME ASK YA THIS…
Is your marketing interrupting or interacting?

Stand up, speak up, or get shut down
The World is a Mirror, Part 12
Adventures in Nametagging: Day 2,185