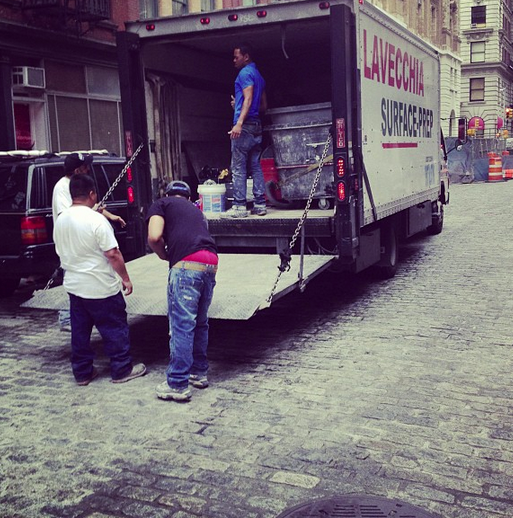 “You tweet the news so you can say you knew first, not because you really care.” The problem is, we don’t really care. We only care about looking like we care. That’s not sympathy, that’s narcissism. And if we don’t work to reverse this brand of digital heartlessness, we’re in serious trouble. But values aren’t taught, they’re caught. We need to find people who care, find proof that doing so leads to more money and more happiness, and find a way to tell everyone about it. Last year I wrote a book called Try Caring. It was a combination of cool things I learned from my clients and angry rants about stupid companies that don’t get it. Maybe that’ll help. Inspired by The Lefsetz Letter.

“I need to be analog and have a pulse in the city.” I traveled almost every week for a decade. It was a huge pain in my ass, but it was part of the job. If I wasn’t on the road, I wasn’t making money. And then all of the sudden, it wasn’t my job anymore. My life became the mathematical inverse of itself, both personally and professionally. Now, I rarely leave town. With the exception of major holidays and occasional getaways, I stay put. And it’s goddamn glorious. I feel like a whole person. I feel like a member of my community. I feel like I’m not missing my life. Here’s a toast to having a homebase. Inspired by the world’s greatest traveler.

“The more mysterious your own creative process is for you, the greater the fear the well is going to run dry.” I rarely get blocked because I have a clear understanding of how I build. For example, I know that if I don’t write it down, it never happened. I know that I sing better when I’m standing up. I know who my muses are. I know that I can’t go more than two days without creating something. I know that I’m more creative when listening to music. And I know that my inhale to exhale ratio is about four to one. These are the realities of my creative process. It took me many years to figure them out, but now that I know, the likelihood of hitting a wall is drastically lower. Sundance knew that he shot better when he moved. Each of us should have that same level of understanding about our own work. Sparked from avideoabout writer’s block.

“We came late to the banquet and were served up crumbs.” This cartoon about thrashing Millennials got me thinking. Instead of wasting time pontificating about what young people may or may not want, why don’t we just ask them? That’s what I never understood about generational studies. It’s always some professor who’s completely out of touch with people half is age trying to tell them who they are. Sorry doc. It doesn’t work that way. What works is when you treat people like adults. What works is when you see people as people, not preferences. And for the record, they’ve never used the term millennial. Ever.

Without An Audience, You’re The Tree That Falls
Thank You For Matching My Crazy
I Like It When Nature Likes Me