How to Hire Yourself 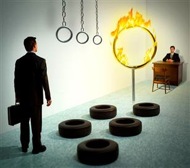 I never went to the career fair.

I just hired myself and got to work.

And after ten years, I still haven’t been fired.

Tired of waiting to be picked? Consider these ideas for hiring yourself:
1. Kick your addiction to permission. Permission is a spiritual revolt. It’s an inner imperative. A soulful drive for significance. And the bridge between mediocrity and remarkability. The problem is, permission is very real and pervasive in most of our lives.

And as such, there are two kinds of people: Those who sit back and ask for permission, and those who step up act without restriction. I wonder which one describes you. Truth is, it’s not a question of who’s going to let you, but rather, who’s going to stop you?

And the answer is: Nobody. Except maybe you. Because the only permission slip that matters is the one you sign for yourself. That’s your first challenge: Greenlighting your own work. Becoming your own authority figure. And sticking your fingers in your ears so you can hear the sound of your own voice.

Otherwise you get sucked into a life situation where mediocrity is exalted. Are you listening to your voice or a program created by someone else?

2. Mainstream is lamestream. Absolute unfreedom is allowing other people to chart the course of your life. But when you hire yourself, everything changes. Just ask Kevin Smith. After writing the screenplay for the movie Red State, the filmmaker promised that the rights to the film would be auctioned off to a distributor at the Sundance Film Festival.

But last minute, Smith decided to purchase the rights to himself. He then self-distributed the picture under an independent banner. And through his persistent social media efforts, he created a sold out traveling show in select cities before officially releasing the movie.

This process saved millions of dollars, reached millions of and elevated his online and offline platforms to stratospheric heights. Smith’s relentlessness is a shining example of what happens when you stay on the path of your heart. He proved that if you’re not making people react you’re not making a difference. He proved that anything worth doing is worth being attacked for. Are you willing to create something critics will criticize?

Make yourself the default. Change the rules so you can win at your own game, change the game so there are no rules, or become the exception to every rule. Because you can’t hire yourself if you’re not interactive, reactive and proactive. Are you waiting for your big break, or manufacturing your own big breaks by making yourself more breakable?

4. Stable is for horses. According to the National Association of Colleges and Employers, only twenty-five percent of recent graduates who applied for a job had one waiting for them after graduation. It’s no secret: Hiring yourself is no longer a renegade choice – it’s a viable path.

First of all, the tools are accessible, affordable and have rapid learning curves. Secondly, offices are a thing of the past and mobile workforces the thing of the present.

Third, open-source software reduces or eliminate the need for consultants and tech support. And lastly, microfinancing, business incubators, peer councils and digital fundraising opportunities are abundant and available – as long as you know how to make a case for yourself.

Yes, half of all new businesses fail within the first five years. And yes, the entrepreneur life is filled with risks, stresses and sacrifices. But it certainly beats working a job that eats away at you just a little more each day. So maybe you take fewer vacations. Big deal. Isn’t it worth it to set up a life you didn’t need to escape from?

5. Farming isn’t for farmers anymore. As a writer, publisher and artist, I’ve learned that best way to bring home the bacon is to raise your own pigs. Think about it: No more traffic on the way to the store. No more inflated retail prices. And no more waiting in lines with the other carnivores.

If you raise your own pigs, and you want some bacon – you just grab a knife and walk outside.

If you are fortunate enough to find the work you were born to do, find ways to do that work no matter what. No. Matter. What. Because the only thing worse than not having a song to sing is having a song to sing, but not giving yourself permission to sing it. The show must go on. May as well hire yourself as the headliner. When was the last time people watched you do what you do?

REMEMBER: It’s about fearing rejection – it’s about putting yourself in a position yourself where rejection can’t even find you.

It might be the smartest career decision you could make.

LET ME ASK YA THIS…
Why are you still waiting to be picked?

LET ME SUGGEST THIS…
For the list called, “14 Things You Don’t Have to Do Anymore,” send an email to me, and you win the list for free!

Adventures in Nametagging: Petrol, Trademarks and Identity Problems
Don’t Take the Road Less Traveled Until You Learn These Six Lessons
Are You Offering Content Or Enabling Contact?