How much info should be printed on your nametag? 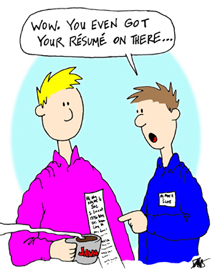 Lately, a lot of people have been asking me the following question:

“How much information should you put on your nametag?”

I say: nothing but your first name. Here’s why…

It’s simple. Too many nametags are jam-packed with too much information, thus decresing the font size of each word, thus making the nametag harder to read. First name is enough.

It’s easier to remember. Sigmund Freud explained that “a person’s name is the single context of human memory most apt to be forgotten.” Why make someone remember ANOTHER name?! They have a hard enough time with one! First name is enough.

Pidgeon holes. You can put your company name or job title on your nametag, after all it IS free advertising. But in so doing, you give people a chance to size you up: “Oh, so you’re only a sales rep? Well then…” or “Wow you’re the CEO! Amazing!” I believe in leading with yours PERSON before PROFESSION. Because people buy people first. First name is enough.

Sterotypes. Face it: when someone looks at your last name, they can get a pretty good idea of your ethnic background, religion and the like. Now, I’m not saying last names are always accurate, but you’re just asking for stereotypes. First name is enough.

Security. I’ve been emailed by several retail employees in the past few years who’ve encountered stalkers, thanks to the last name on their nametag. In fact, I even had my own stalker a few years back – and I didn’t even have a last name on my tag! First name is enough.

LET ME ASK YA THIS…
How much information should be printed on someone’s nametag?

The World is a Mirror, Part 15
HELLO, my name is Manifesto
27 ways to grow bigger ears