Do you have character, or are you just a caricature? 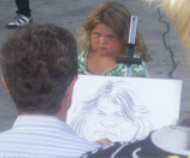 Character is the congruency between your values and your verbs.

And that’s not all.

Character is the great catchall. Because when you leverage it, everything else falls into place.

Character trumps technique. Because when you practice it, formulas and systems become useless.

Character wins ballgames. Because when you lead off with it, you always run up the score.

Character makes money. Because when you invest in it, you exponentialize your assets.

Interestingly, the word “character” derives from the Greek kharakter, which means, “The engraved mark.”

Hmm. I wonder what mark YOU’RE leaving on people. Talk about approachable!

OK. Let’s talk about that other word.

Caricature is the exaggerated, unsuccessful version of yourself.

You know, the one you broadcast to the world when you’re trying to prove yourself to people you don’t even like? Yes, that one.

And that’s not all.

Caricatures are performances. And that disingenuous state of being is NOT the way you want people to experience you.

Caricatures are masks. And eventually, people will wonder who you (really) are in unguarded moments.

Caricatures are manufactured. And that translates into a continual process of having to remember who you are.

Caricatures are a lot of work. And after a while, you’re going to realize that putting on an act is exhausting.

Caricatures are one-dimensional. And with such a limited worldview, you mar your ability to relate to others in a healthy way.

Interestingly, the word “caricature” comes from the Italian caricatura, which means, “satirical picture.”

Hmm. I wonder if people see YOU as a walking joke. Not so approachable.

Either way: Have character, or be a caricature.

The choice is yours.

LET ME ASK YA THIS…
Are you engraving your mark or satirically overloading people?

LET ME SUGGEST THIS…
For the list called, “37 Personal Leadership Questions Guaranteed to Shake Your Soul,” send an email to me, and you win the list for free!

9 Ways to Make Your Business More Findable than a Smile at a Nudist Colony
Inspiration is Overrated: 6 Ways to Cash in on Creative Discipline
9 Secrets REAL Thought Leaders Know