But I’ve already seen that movie like, ten times! 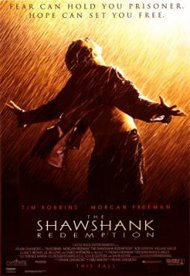 Shawshank Redemption is one of the greatest movies ever.

That’s not an opinion, that’s a fact. It’s #72 on The American Film Institute’s list of Top 100 Movies of All Time.

SO THE QUESTION IS: What makes that movie so great?

Yes, the script is brilliant.
After all, it WAS based on a Stephen King short story.

Duh, the cinematography was unreal.
Of course – Sam Mendes directed it.

Sure, the acting is phenomenal.
Morgan Freeman and Tim Robbins. Can’t beat ‘em.

And of course, the story is incredible.
Remember at the end when the warden finds the tunnel behind the poster of Rita Hayworth and the rock hammer in Andy Dufregne’s bible? Classic!

But there’s another characteristic of that movie that makes it the best.

You can watch Shawshank a hundred times, and still take away something totally different EVERY time.

And there is SOME truth to that gripe. I can understand how people wouldn’t want to expose themselves to certain things multiple times; for fear that those things would become repetitive and predictable.
BUT THE REAL THE QUESTION IS: What if it’s not the movie – but rather, YOU – who changed?

Sure, every time you watch Shawshank, the move is going to be the same.

You can’t step into the same river twice.

AND HERE’S THE SCARY PART: Next time you’re considering NOT reading a book you’ve already read before; NOT watching a movie you’ve already seen before; or NOT listening to a speaker you’ve already heard before, ask yourself this question…

What if your customers said that about YOU?

LET ME ASK YA THIS…
Why are your customers coming BACK to you?

LET ME SUGGEST THIS…
For the list called, “13 Reasons Your Competitors Are Getting More Attention than You,” send an email to me, and I’ll send you the list for free!

Scott Ginsberg
That Guy with the Nametag
scott@hellomynameisscott.com

Beware of being TOO
Back to the Future Questions™
NametagTV: Return Calls Faster