43 reasons to make lists for EVERYTHING 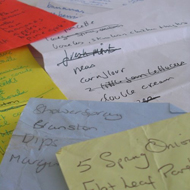 2. Lists are easy to write.

4. Lists are easier to memorize.

6. Lists force you to clarify your thoughts.

8. Lists allow us to easily put information which belongs together in one place.

9. Lists give people who don’t like to organize a great way to organize.

10. Lists make it easy to expand and stretch your main idea.

12. Lists make people happy. See, with the acceleration of our culture, when reading online, people don’t even read anymore. They scan.

13. The “architecture,” or creative design and page presentation of a list is easily digestible.

14. Lists “breathe” well. This is a term borrowed from the music world, referring to the space, time and breaths between notes. It’s easier on the ears, or in this case, easier on the eyes.

15. Listing is the simplest, quickest and most efficient way to capture your ideas before they fly away to But You Never Wrote Me Down Land.

16. Lists get pinged, WOW’ed, talked about, linked to, digged and blogged about.

17. Lists appeal to the hyperspeed, A.D.D and quick fix nature of our society.

19. Lists, unlike the majority of the web’s content, aren’t laborious and annoying to read.

22. As Julia Cameron said, “Writing teaches you something: that you never write just what you know. You write what you learn as you’re writing. Ideas come to you and trigger other ideas.”

24. Listing stimulates creativity. Ideas connect with one another, crystallize and produce insights you never would have discovered by writing a five paragraph essay.

25. The human brain is a self-organizing machine. Listing subconsciously creates patterns, groups and “piles” of material that seem to come together on their own.

26. Did I already mention that writing is the basis of all wealth?

27. Which leads me to the next point: lists enable you to “call back” and reemphasize important points in a poignant, yet humorous way. (See #23 and #10)

28. LET ME ASK YA THIS: why are you reading this very list, right now? Did you see it on Digg? Did someone email you the link? Did the title entice you? Make a list of your answers. That will help you understand why lists work.

29. Lists don’t prioritize, segment, take sides or bias any one item; but rather allow you to simply get it all down on paper. And sometimes that’s the hardest part of writing. Because if you don’t write it down, it never happened.

30. Look at the most popular articles, blog posts and tagged stories on the Internet: all lists. Coincidence?

31. Lists help you examine your ideas, thoughts and problems visually in ways that other forms of writing architecture fall short.

32. Lists often force you to come up with an idea quotient. This is a perfect way to motivate your melon!

33. Lists are easy to reuse. You can break up certain items and expand on them in other modules.

34. Lists are really, really easy to print out and distribute to everyone in your office. And they’re conducive to sharing, i.e., “Hey Steve, check out this list of 31 ways to play jokes on your boss!”

35. WHICH REMINDS ME: if you want to see some of the best listers on the web, check out these examples by Gitomer, Godin, Peters and McLeod. (Also, if you want to read ALL of my lists, go here.)

36. Listing is for everybody. Because even if you’re not a good writer (or a writer at all) ANYONE can make a list!

37. Listing sifts through the bullshit. It gives people the guts, the meat, the good stuff, the essence and the cliff notes of your idea. Which is good, because most readers don’t have time (or care) to read anything else.

38. Speaking of readers, remember this: you can’t depend on your readers to connect the dots. Listing punches them in the face. In a friendly way.

39. Also, when you make a list, you don’t think – you react. And that’s when the best stuff usually comes out. Just like in the world of improv.

40. Lists are predictable. When someone sees a blog headline called, “17 lessons learned from this weekend’s bachelor party,” he knows exactly what to expect. And people like predictability because it leads to familiarity, which leads to trust.

41. Lists are edit-friendly. Following the “easy does it” approach to creativity, you can easily add an item or two to your list at your own discretion.

42. Lists are impervious to writer’s block. Because even if you can’t think of anything good to write, you always add an item or two to your list.

(And finally, the 43rd reason to deliver your content with lists…)

43. THINK ABOUT THIS: most of the major religions in the world were founded on lists: The Ten Commandments (Judaism/Christianity), The Five Pillars (Islam), The Four Noble Truths (Buddhism). Now, say what you want about religion. But billions of people have been living by, adhering to, spreading, rewriting and teaching lists for centuries. That’s gotta mean something.

LET ME ASK YA THIS…
Why do you make lists?